I don't know about you lot but keeping the kids occupied can be hard work at times! Especially during the current circumstances. With Easter on the horizon it's a great opportunity to kill two birds with one stone and treat the munchkins to a toy for Easter (instead of chocolate) that'll keep them occupied for hours. I'm sure they'll thank you for it with some nice peace and quiet! 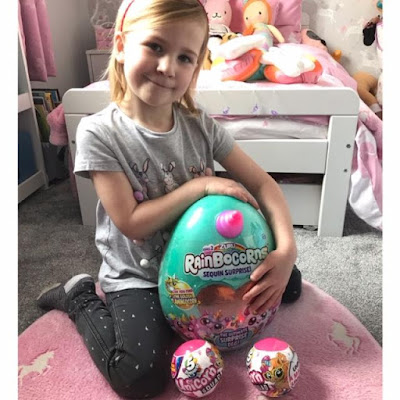 Logan and Harlow have both been very lucky to receive some fabulous toys from Zuru which have been keeping them very busy. Logan received a super cool Smashers Epic Egg and some 5 Surprise Dino Strike capsules whereas Harlow got a Rainbocorns Series 2 Ultimate Surprise Egg and some 5 Surprise Unicorn Squad capsules. Both kids were delighted with their treats and couldn't wait to get stuck in. As you can imagine Harlow was most impatient to get into her Rainbocorns Series 2 egg so I let her open that first. 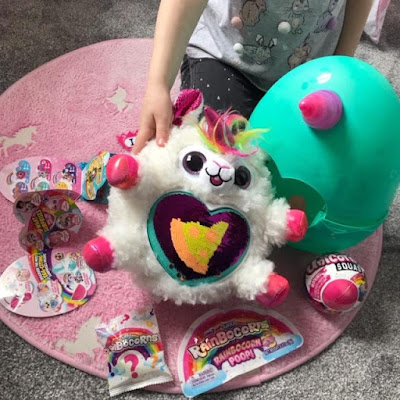 So what are Rainbocorns? They're cute cuddly toys and the Rainbocorns Series 2 is the ultimate surprise egg. It's like a special unboxing egg with 10 layers to hatch and discover. Think YouTube surprise unboxing and you get the idea. With series 2 of these adorable creatures there are 13 new characters to collect including Unicorns, Llamacorns, Pandacorns and even a rare golden Flamingocorn. Every egg includes a collectible teal egg, a hatching hint, scented plush, surprise sequin accessory heart, collectable Boo-Boocorns, Rainbocorn Poop, stickers, collectible accessory and collector’s guide. Lots to keep the little ones happy. 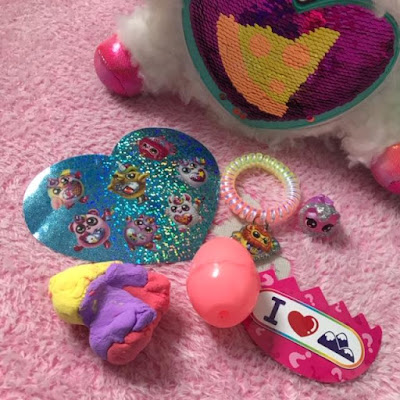 When we peeled off the first layer to get into the egg a piece of paper with a hatching hint (a clue as to what creature was inside) floated out. It had I Love Mountains on it! Harlow was then so thrilled to hatch a beautiful Llamacorn from inside her egg and I was surprised to smell it was scented. It smelt gorgeous with lovely vanilla notes which were easy on the nose. Harlow cuddled into her Llamacorn at bed time and she smelt like vanilla in the morning, so cute. There were more surprises inside with a bag of Rainbocorn poop that is also scented and is kind of like a foam goo, if that's a thing? It's great to play with and doesn't cause any mess (so thankful). The little Boo-Boocorn (which is like a mini rainbocorn baby inside an egg) we got inside was a lion type but did you know there's over 40 new ones to collect including rare twins! Harlow's put more Rainbocorns Series 2 on her present list as she's desperate for those twins. Our Llamacorn also has a sequin surprise heart that can be clipped to your backpack, hair, or clothing, and swapped with friends. You brush the sequins the other way to discover the secret, Harlow's Llamacorn had a slice of pizza on her heart. 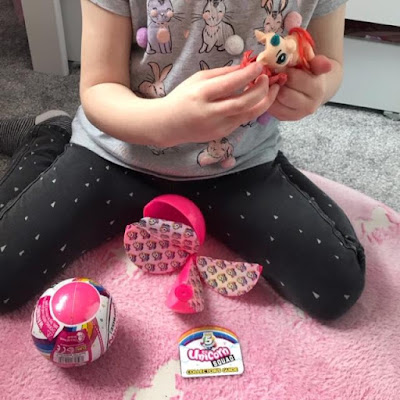 The surprise elements of this egg are great and kept Harlow occupied for ages. She's played with all the items every day over and over again so I'd definitely buy her another one. Great as an alternative Easter present or a fab boredom buster. If you're kids also love surprises not only will they love these Rainbocorns Series 2 but they'll love the 5 Surprise Unicorn Squad. They're very similar to the surprise eggs but instead are capsules on a smaller scale. They're still awesome and have 5 surprises inside, you crack them open like a chocolate orange and peel each slice to find the surprise inside. You get a unicorn body, cool hair, accessories, goo and stickers. Rainbocorns Series 2 retail for £24.99 and the 5 Surprise Unicorn Squad retail for £6.99 each. Both great presents to give and receive. 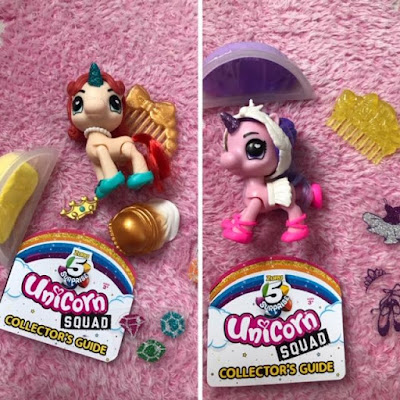 Next up is Logan's Smashers Epic Egg. It's another surprise egg but this time you collect and build one of 3 exclusive Smash-o-saurs dinosaurs. There's lots of different elements to it and you basically slime, fizz and SMASH your way through over 25 surprises inside. There's a little scratch map which you use to excavate the Dino Egg to unearth compounds like the Fizzy Lava Bomb and Ice Age putty with hidden Smash-o-saur bones. Collect all the bones to start building your dinosaur. Each egg includes 1x Epic Dino Egg shell, 1x Dino Egg Yolk Bag, 1x Scratch Map, 5x Compounds, 6x Smash Eggs w/ rebuilder, 1x Digging Tool and 1x Exclusive Smash-o-saur Dino. 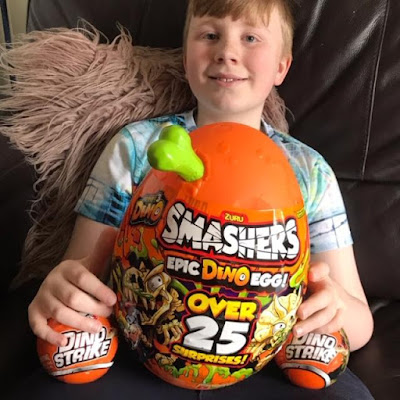 Logan loved this egg as it was more of an activity to find the dinosaur bones to build your exclusive Smash-o-saur. He used the scratch map and started at number one, scratching off the panel with a penny to reveal the Dino Dirt. It's like sand and had a dino bone inside which we took and placed aside for when it was ready to build. I really like that the Dino Dirt has a resealable package so the dirt can be played with again and again. A few of the packets are like this so a very well done there as we'll most definitely use them again. The next scratch panel revealed the Fizzy Lava so we poured some water over it and watched the lava melt away to show us the bones inside. It's like a bath bomb so doesn't take long to fizz away. After that is was the glowing slime then the fossil rock and finally the ice age putty. The fossil rock took the longest but you get a little digging tool to help you. All of these were great activities which kept Logan busy for over an hour. 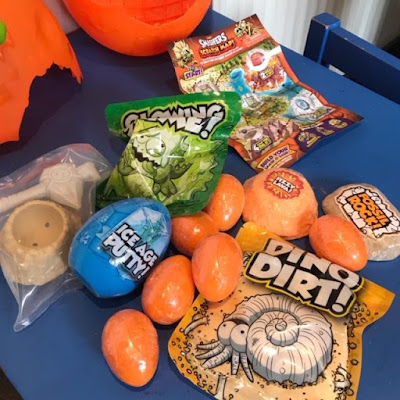 It was finally time for Logan to build his dinosaur and he was so happy with the finished result. He's going to put it in his room on display and to keep it safe from his sister haha. As well as building his dinosaur there were also 6 smaller smash eggs inside the big epic egg that contain small collectible creatures. You can purchase these as separate packs if you want more from Smyths Toys but you get them included in the epic egg which is nice. Logan was happy to let his sister open these smash eggs with him and I really like that the eggs can be rebuilt and smashed again and again. Loads of fun to be had as well as pretend play potential, Harlow's already had them playing with her dolls. 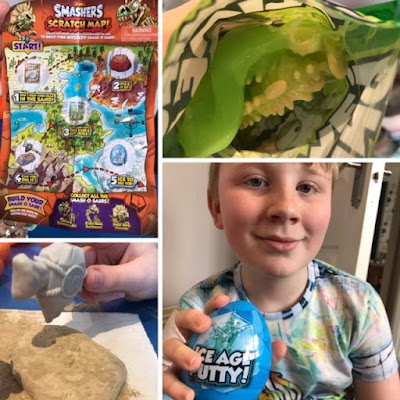 I highly recommend the Smashers Epic Egg, it's a great way to entertain the kids and Harlow has asked for her own one next time. Lots of the surprises inside can be kept and used over and over so nothing will go unused, especially at the moment since no one can go anywhere. My kids quite like to play in the back garden a lot now and you can't go wrong with some dinosaurs for outside fun. Even better they can take the slime outside with them too haha. Smashers Epic Eggs retail for £24.99 and can be purchased from Smyths Toys. Personally I would order sooner rather than later. 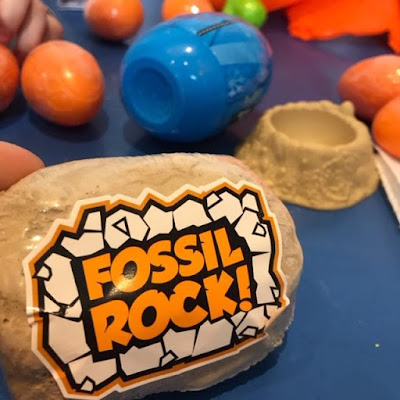 Logan also received the 5 Surprise Dino Strike capsules and these are a great Easter alternatives as well. They're just like the Unicorn Squad ones and every capsule includes a battling dino ready to be assembled, 1 customizable weapon backpack and 1 or 2 swappable weapons to battle with. There's 13 different Dino Strike characters to collect including a rare molten gold T-Rex fossil. Logan really enjoyed opening these and building his dinosaur inside. They're a good size, great for collecting and pretend play. They retail for £6.99 which is a great price and perfect for popping in along with an Easter egg. 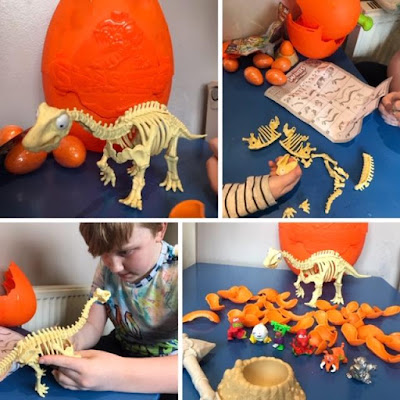 Both of my kids really really enjoyed their surprise eggs, so much so that they've been asking for more so you know it must be good. They're both still playing with the ones they have at the moment as the fun never seems to stop. I'd buy them myself in future as gifts for the kids or presents for their friends so I really would recommend. As I've said perfect boredom busters and a great alternative to a chocolate Easter egg. Happy shopping! 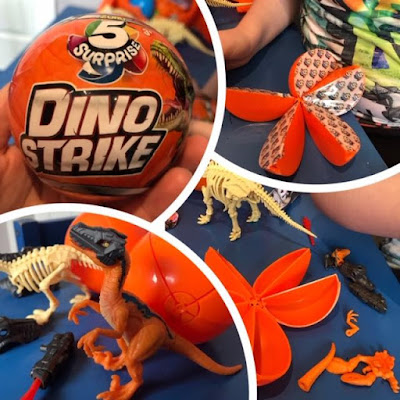 These items were gifted for the purposes of this review. All opinions are my own.