As you all probably know we like to do a bit of travelling as a family but keeping the kids occupied (and not fighting one another) on our travels can be tricky at times. Most of the time they're great but sometimes hassling your sibling is pure gold and an opportunity not to be missed. I'm always looking for things to distract the kids from attacking each other so when Orchard Toys got in touch to see if we'd like to review some of their mini games I really couldn't refuse could I! 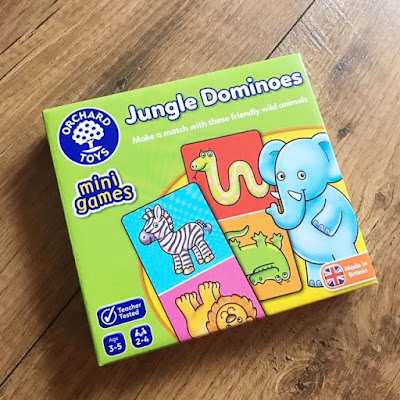 Everyone knows Orchard Toys provide brilliant games for kids to keep them occupied for hours but did you know they also have a large selection of mini games which are perfect for on the go; in the car, on the plane, in the camper van, by the pool, in the restaurant, in a remote part of Scotland with no wifi! You get the idea and honestly they're so worth investing in. Take it from a frazzled parent who constantly blows the referee whistle. 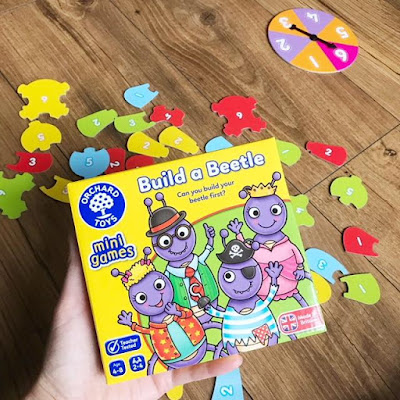 So what games did Orchard Toys send to keep the kids amused? Well we got the fab Jungle Dominoes and Build a Beetle. Both games are great to play but we'll start with Jungle Dominoes which was Logan's favourite. The game is suitable for 2-4 players and ages 3-5 years but Logan is almost nine and really loves a game of dominoes. I think it reminds him of when I would take him into the hospital to see his Great Grandad and we'd all play dominoes together. Most people do know how to play dominoes but for the avoidance of doubt there's 28 in this pack which you shuffle then deal 7 to each player. The remaining dominoes are then placed face down in a pile close by. The youngest player places one of their dominoes face up in the middle of the table and players then take it in turns to match one of their dominoes to either end of the domino chain. If a player cannot make a match then they take a domino from the main pile. The game continues until someone has either used up all their dominoes or no cards can be played in which case the player with the fewest cards would be the winner. It's a really straight forward game and very easy for young children to understand. The fact that each domino has jungle animals with bright colours also helps the finding and matching process. Harlow is three and I was surprised by how quickly she picked up the rules of this game and really enjoyed playing it. Don't get me wrong she wanted to make up her own rules at some points (when she was losing) but she generally stuck to the game plan. As well as matching skills this game really helps to promote observational skills and develops personal and social skills. At £5.00 it's a total winner in my book and being transportable makes it even better. We'll definitely be taking this on our next holiday very soon. 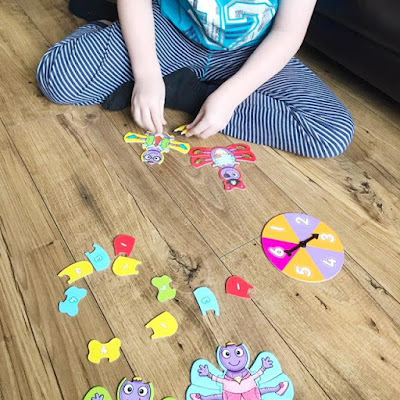 Next up is the Build a Beetle game. It's suitable for 2-4 players and ages 4-8 years. Included in the box is 4 nine-piece beetles, 1 spinner board and 1 two part spinner (which you clip into the board). It's another easy simple game to set up and play. You place the beetle pieces number side up in the middle of the table and you're good to go. Players take turns to spin the spinner and to start building your beetle you need a 6 to collect the body. Play then basically continues with each player having a shot of the spinner until all their body parts are collected and the beetle is built. The winner is the first person to complete their beetle. The beetle can be built in any number order apart from the antennae (no4) which can only be collect after the head (no5). 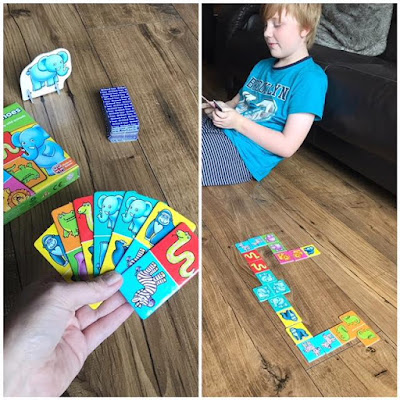 It's a really good fast paced game which helps to develop matching and memory skills, number and counting skills, encourages observational skills and helps to develop personal and social skills. Harlow really liked this game as it was fun to watch her beetle being built piece by piece and she adapted well when she didn't get the piece she wanted. Good for teaching a little bit of patience. Logan really got into the hang of this game so quickly and we played a good few games together, at least best of five. 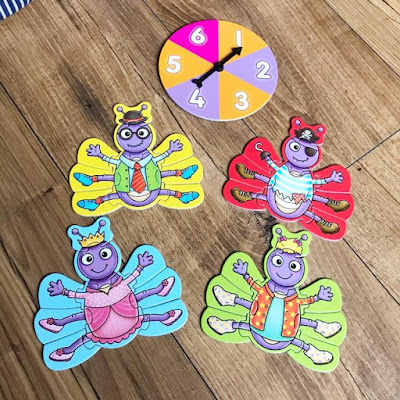 Orchard Toys have 12 mini games altogether to choose from and at all £5.00 each they're an amazing way to keep the kids occupied on your travels. I personally love that these games are simple and super quick to set up. A lot of the times you can guess how to play and don't even have to look at the instructions. The kids and I really loved these mini games and I'd highly recommend to friends and family. They would make excellent little gifts too.

We were sent these games in return for an honest review. All opinions are my own.

We do enjoy orchard games. They are fun, well made & educational. This one is a firm favourite here x

They're fab aren't they Susan. We have a huge storage box full of their amazing games :)