During the Easter school holidays the family and I took a trip up North to stay at the lovely Ancarraig Lodges in Drumnadrochit beside Loch Ness. I always do a quick internet search before we visit a new place to see what sort of things we can do with the kids and the Landmark Forest Adventure Park popped up. From their website it looked like a fabulous place to visit with lots of different attractions from playparks, rides and tree top walks to a butterfly house and world of illusions. There was even the chance to spot red squirrels! Luckily for us the lovely people from Landmark got in touch and offered us a family pass to try out their park. The kids were very excited and couldn’t wait to visit. 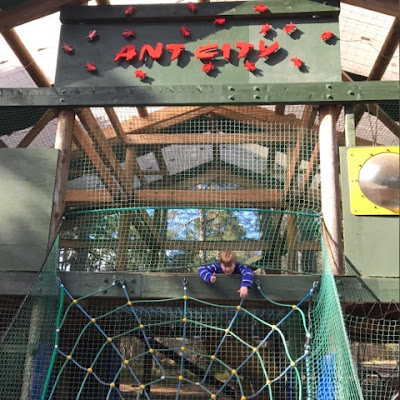 The Landmark Forest Adventure Park is based in Carrbridge which the sat nav advised was about an hours drive from our lodge. In reality with the quiet roads up North it only took us around 40 minutes to get there. It was really busy when we arrived (probably due to the amazing weather and school holidays) but if you booked tickets online/had a pass/are a season ticket holder then you got to use the fast track lane and walk right through. Since it was our first visit to the park the lovely gentleman on reception gave us a map and explained all about the different attractions within for us to visit. Because it was the Easter holidays he also informed us about the golden Easter egg hunt taking place. The kids were buzzing to find some and eat the chocolate inside. As Logan is autistic he received a fast track assistance pass to wear so he could skip the queues for the rides. This did come in really handy and is well worth asking for if he need it. 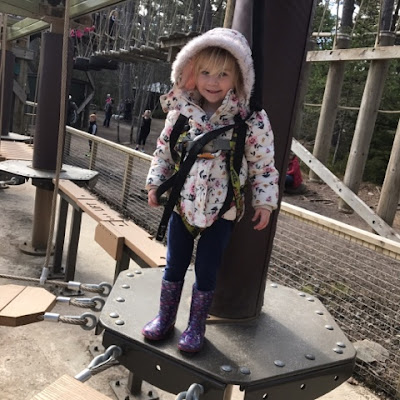 After heading out of reception we crossed the little bridge and went straight into Ant City. It’s a lovely big outdoor wooden play park/ climbing frame with lots of slides, nets to climb, things to jump on and discover. We spent a good bit of time here letting the kids burn off some energy before we went on to explore the rest of the park. Next up Logan chose to have a go on the trails. He was big enough for the Tarzan Trail so off he went with his Dad to try it out. They even had a trail for toddlers called the Wee Monkey Trail and Harlow was excited to give it a bash. It was so cute and she did really well. 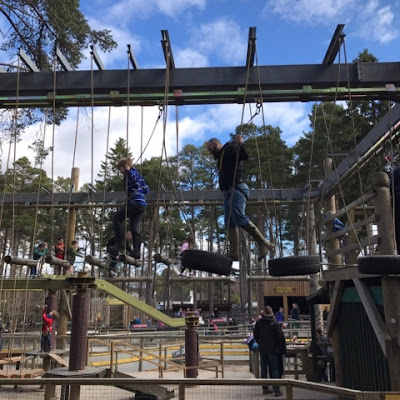 By this time Harlow was desperate for a snack so whilst she was eating we had a walk around a little fenced off area which included a vortex tunnel, growing shrinking room, topsy turvy room as well as some lovely carved wooden structures. The vortex tunnel was brilliant and we’ve experienced the same thing at Camera Obscura in Edinburgh. It literally makes you lose your balance, such a brilliant illusion for the mind.  The Runaway Timber Train was next and it’s basically a roller coaster. Logan loves a roller coaster and he was excited to realise that you got to have two shots in a row. He even got to sit in the front carriage so was very pleased. 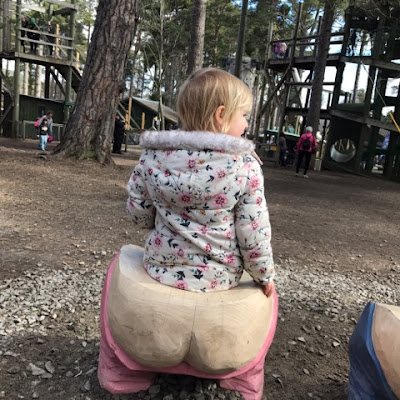 The adventure park has a butterfly house within the grounds so we decided to have a nosy inside. When we went in there were lots of butterflies flying around every where and it was nice to see lots of educational signs posted around to read. There were even a few cheeky little birds doting about in there and one landed near the fish pond right beside the kids. We kept our hands to ourselves though as we read the signs that they like to nip. One man wasn’t so lucky and a cheeky bird decided to sit on his arm and peck his hand. The kids thought it was hilarious and there was no harm done. 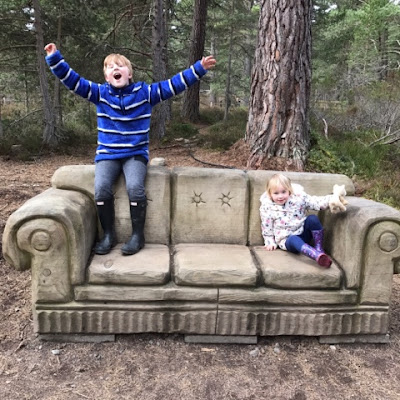 Next to the butterfly house is Wonderwood where the massive Fire Tower is located. We never counted the amount of steps we had to climb but getting to the top of Fire Tower took a wee while for small legs. The views at the top were so worth it though. You could see across the whole park and even further spotting the Cairngorms Mountain Range in the distant. It was breath taking and there’s a telescope at the top if you want a better look. By this point it was now lunch time and the kids were starving so we headed back down towards reception were Foresters Restaurant is located. They had a lovely selection of cakes as well as soup, sandwiches and hot options such as beef nachos and fries. Everyone scoffed down their lunch so we could visit another part of the park. 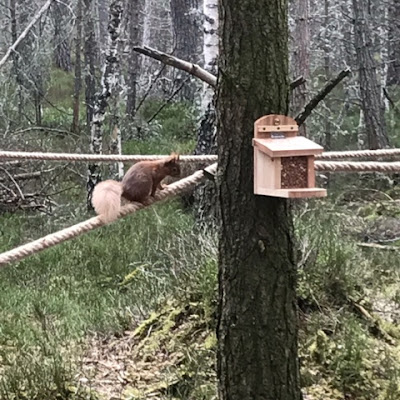 Right next to the restaurant is the Landmark Shop so we had a quick look in there before heading to the Bamboozeleum. Inside the bamboozeleum is a world of illusions which will keep the kids busy for ages. It was hoots of fun and even us adults really enjoyed ourselves. After a good few giggles we headed out into the open again to explore the Red Squirrel Nature Trail. It’s brilliant because it’s a wooden walk way built up high into the trees. It’s all very safely fenced in with lots of fact boards along the way and the kids really enjoyed it. On our way back down we managed to spot of red squirrel way up high in the trees. Further down towards the exit we passed the wildlife feeding area where there were 2 more red squirrels jumping around. Logan loved seeing them especially after having learned about them from the nature trail. 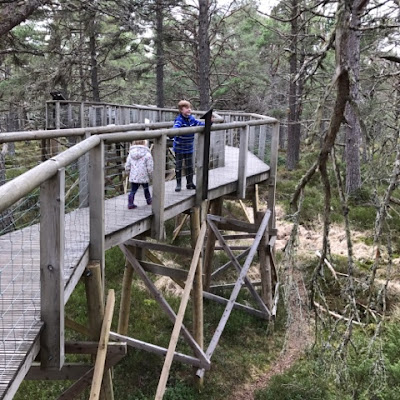 It was getting later in the day now and there were still a few things we hadn’t seen so our next stop was The Lost Labyrinth. It’s a fantastical maze to get lost in and this is where we managed to find some golden eggs! The kids were overjoyed and the chocolate within the eggs gave them a second wind to keep going. There really is so much to do and see here. After the maze was a trip to the forest safari so Logan could have a shot on the little electric cars then it was a hop skip and a jump to the Haggis Farm Shooting Gallery to try out our aim. I was rubbish but Logan and the hubby were quit good. Well done boys. 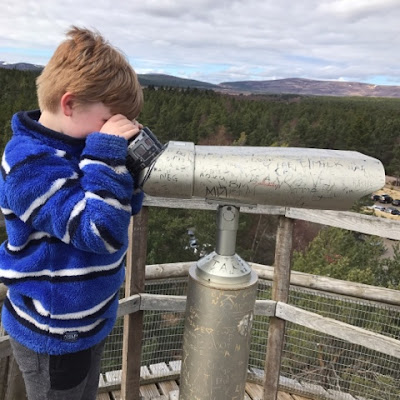 Before it was time to go we spent the last of our day letting the kids play at the Ant City and there was a smaller Kids Zone opposite which is great for toddlers. When it was time to go we grabbed some snacks and drinks from the Xplore Store and headed to the car park ready for our journey back to our lodge. What a fantastic day we all had. 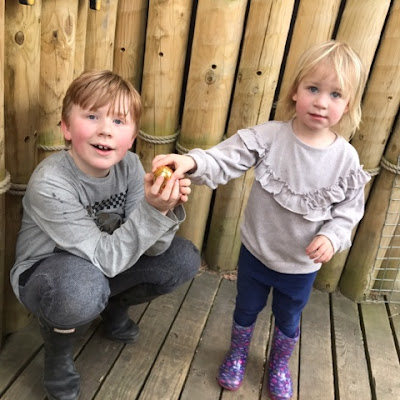 So if you’re ever up North, say near Aviemore, then definitely pop into the Landmark Forest Adventure Park for a full packed day of family fun. The kids really enjoyed themselves as well as us adults and there was never a dull or boring moment. You could easily go round most of the attractions more than once and there’s plenty of seating throughout the park if you need to rest your tired legs. When we’re next up North we’ll definitely be back. Thank you Landmark Forest Adventure Park for such an amazing day! 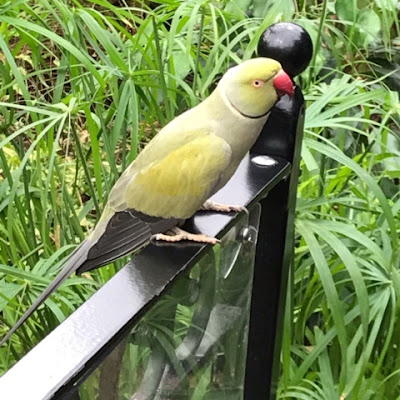 We received a family day pass in return for an honest review.