How to Encourage A Reluctant Washer to Get In The Bath!

Recently in our house it's been a bit of a nightmare to get my almost 8 year old son in the bath. He used to love bath time as a baby but now it's more like a chore for him and just another distraction on the list of things keeping him from his iPad/TV Programmes/Playing outside with friends.

It actually got to the point where I was literally having to drag him into the bath and of course he was becoming quite distressed with it all but he can't not wash. He's getting older and changing and well he really needs a good scrub after he's been running around with his friends or playing football etc.

The hubby and I finally managed to crack the bath time dread when I received some bath bombs for my birthday and the boy was intrigued by what they did. I honestly couldn't get over how quickly he jumped in the bath so from then on we've been using bath bombs from Lush to make sure he has a wash ha ha. It totally works for us and might not work for everyone and that's why I asked fellow parents what they've done to get their reluctant washers in the bath. 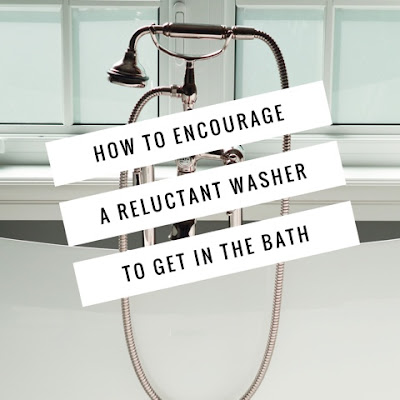 Victoria from The Growing Mum says: "This one might depend on the child's age but getting into the bath with my 8 month old stopped him crying immediately he was placed in it. We also played with the ducks outside of the bath so he recognised them when he was inside the bath."

Elizabeth from The Home Makers Journal says: "Make it really fun - we make it a race and see if we can do the whole bath before a timer that I set for five minutes goes off. Sometimes we’ll have a dance party shower—singing and dancing in the shower together."

Kirsty from Winnettes says: "I find music helps, any type of music, even upbeat and fast not necessarily calming music. Also having a selection of bath toys that I keep out of sight and in rotation can help with the excitement of bathtime so they are more willing to be washed."

Alana from Baby Holiday says: "I've bought a couple of bath bombs for my boys. They love throwing them in to watch the bubbles, and it helps that the water turns a cool blue colour!"

Pete from Household Money Saving says: "When we had problems, I let my daughter choose some music she liked from YouTube. I put it on my phone and she could listen to it in the bath."

Jenny from Monkey and Mouse says: "My 6 year old loves being able to take some sort of toys into the bath, making bath paint to use on the tiles and bath bombs or similar. Anything that makes it that little bit more exciting!"

Michelle from Time and Pence says: "We bought a Tomy Foam Cone Factory. Making ice creams in the bath did the trick."

Christy from Welsh Mum says: "You can get bath lights which you drop into the water and the water really glows! I think this is a fun and easy way to get them in the tub."

Beth from Twinderelmo says: "Swimming goggles may help. My son hated getting water in his eyes so goggles made him feel “safer” plus now he likes to be able to see under the water with them."

Emma from Ready Freddie Go says: "Bath jelly! It really made baths fun for my little one again and he felt safe once more to enjoy his baths."

Jo from Ojo's World says: "My son has a *shath*, we run the shower over the bath while he's in there. Add a cup and some cheap shaving foam, to make volcanoes. Also toys that work best under running water, makes it great fun. If all else fails, a favourite film playing, we sit his tablet on the toilet or towel basket."

Sarah from Mummy Cat Notes says: "Lots of toys and I brought a couple bath bombs for them, they love it when the bath changes colour."

Claire from Bumps Babies Tots and Teens Mummy Diaries says: "Does your child have any sensory issues? Maybe introduce water play, let them take a toy of their choice (within reason) into the bath with them, lets them help run the bath, agree the temperature of the bath, let them choose wash products. Maybe experiment with bath bombs, foams, sponges, brushes etc. If still reluctant maybe try a shower or use the shower head over the bath to speed up the washing process."

Laura from Mummy Lauretta says: "We bought some of that new Palmolive chocolate shower gel and the boys can't wait to get in the bath and use it! It's smells so sickly but they love it."

Cass from Frugal Family says: "Bath crayons always used to make bathtime fun for my two - just remember to clean their 'drawings' off quite quickly afterwards or they're quite hard to get off!"

4 comments on "How to Encourage A Reluctant Washer to Get In The Bath!"

Thank you for including me, sine great ideas in there! x

Thanks for contributing Jo x