Today's lovely breastfeeding guest post is from Debbie, the blogger behind My Chaotically Eclectic Life. She's a SAHM, blogger and general skivvy for her family. She loves crafting, planning, reading, food and the colour purple. In order to indulge in her love of food she's embarking on a weight loss and fitness journey. You can also find Debbie on Facebook, Twitter and Instagram so why not pay her a little visit. 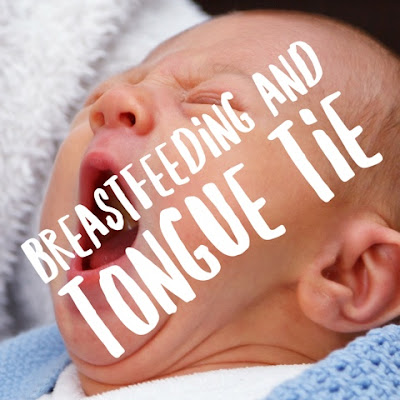 Tongue-ties affect between 4-11% of all newborn babies and it tends to run in families, with boys being more commonly affected.

For those unfamiliar with the term, a tongue-tie is where the strip of skin underneath the baby's tongue is shorter than usual. This can cause problems when feeding due to restricted movement of the tongue. It can also cause speech issues as they get older.

From the minute Corey arrived on the planet my OH suspected he had a tongue tie.  He was aware of the condition due to his godson having one.

However due to the arrival of his first born son and the lack of sleep he didn’t think to mention it to the midwives in the delivery suite and I was in a world of my own so didn’t really take much notice if I’m honest.
Once we moved to the maternity ward I was asked given the usual post natal checks and asked the standard questions regarding feeding. As this was my second baby, other than checking he was latched on, they pretty much left me to it. They popped back on their rounds and asked all the usual questions; when was he last fed? How long did he feed for? They seemed happy with the answers and Corey seemed contented enough so there was no cause for concern.

My first night in the hospital went pretty much as you would expect with a new baby He fed, slept and cried a little. Still nothing seemed out of the ordinary. I was kept in overnight on the day he was born and other than a couple of routine checks as the midwives did their rounds we were left to our own devises. I’m not a big one for being fussed over so this was fine by me.

The following day I requested to be discharged and waited to see the paediatrician. By this time my OH had informed me of his concern about Corey’s tongue tie and we mentioned it to her as she performed her checks. She had a quick look and said there was nothing to worry about. How wrong she was!

Looking back, I should have mentioned it sooner, maybe to one of the midwives but the euphoria/lack of sleep surrounding a new baby and the fact he seemed to be feeding fine meant that this was overlooked.
We were discharged and spent the next couple of days adjusting to our new addition. Feeding still seemed to be going well, he was feeding regularly and sleeping well. My milk came in after a couple of days and that’s when things seemed to take a turn for the worst.

By our third night at home my nipples were cracked and extremely sore; my happy, contented baby had become a demon at night and I seemed to be feeding constantly. I initially put it down to being tired and the strain of a new baby. My OH was getting distressed by it all and when, on the fourth or fifth night, he woke to find me sobbing on the bed with a screaming baby I said enough was enough. At 2am he was dispatched to Asda for some formula.

After than initial wobble, which I put down to hormones and a lack of sleep, I carried on breastfeeding. I managed to find myself in a comfortable feeding position and everything appeared to be back on track.
Fast forward to the weekend and Corey’s 7 day review with the midwife arrived. She did his heel prick and we got him ready to be weighed. We were prepared for a small loss from his original birth weight of 8lb 5oz, what we didn’t expect was that he would have lost 11% of his birth weight!

The midwife explained that although it was normal for babies to lose some weight in the first week, this was above what was expected. She asked how feeding had been going and we explained the struggle we’d had with the breastfeeding earlier in the week and subsequent crystals we had found in his nappy the day before. We also mentioned that we thought he may have had a tongue tie but that the paediatrician had confirmed everything was fine.

Luckily, she checked herself just to make sure and the minute she opened his mouth she confirmed our suspicions. He did have a tongue tie and it was quite a bad one. She advised that we could make an appointment to have it snipped but would have to see the doctor first to be referred. The alternative was to be re-admitted to hospital via A & E due to his weight loss.

We chose the second option and 7 days after giving birth I was back on the maternity ward. I was shown to a private room and awaited my consultation with one of the midwives that specialised in breastfeeding.
She came in and suggested that I express some milk to give him and hooked me up to ‘Daisy’ and industrial sized breast pump. The whole situation was quite surreal if I’m honest. Once I’d pumped enough milk the midwife showed me how to feed him with a cup. She made it look easy, I made it look really hard.

After visiting time was over I was informed that unfortunately I was no longer able to stay in my own little room and was to be moved back onto the main ward. It was the strangest feeling, especially when I was wheeled down the corridor to the exact same location as the one I had vacated a week earlier.

The following morning we were informed that an appointment had been made for Tuesday for Corey to have his tongue tie snipped. I was advised to stay in hospital until after the appointment so they could monitor his weight/feeding etc.

If I’m honest I don’t really remember much about the two days I was in hospital as it passed in a bit of blur. I struggled to get a handle on feeding Corey with a cup so the midwifes suggested I went back to breastfeeding on demand, which ended up being almost constantly.

On the morning of the appointment we made our way to the ENT department where the tongue-tie snip was to take place. Our time came and we made went into the consulting room where we were talked through the procedure. One of us was asked to sit in a large dentist style chair and hold Corey’s head still. This was where I relinquished responsibility to my OH; the combination of hormones, broken sleep and the fact that someone was about to take a pair of scissors to my 9 day old baby was too much for me to process.

I sat at the side of the room, averted my eyes and prepared myself for the cries. After a few seconds I heard the Consultant say it was all done. Corey hadn’t made anything more than a murmur. We were allowed to head on back to the ward to feed him again under the supervision of the midwife. We weren’t even half way there when he fell asleep.


The first feed after his snip went really well and the midwife was happy enough to let us go home later that day.

He was like a totally different baby after his division. His feeding was a breeze compared to the pain and discomfort we had suffered the for the first 10 days. He fed perfectly and we soon managed to finally settle ourselves into a routine. His weight steadily increased and he made it back to his birth weight within a couple of weeks.

I must point out that prior to Corey’s tongue-tie I was almost unaware of what to look for and if it hadn’t have been for my OH and the midwife I would have been none the wiser. In all the baby books I read/was given prior to the birth I don’t remember seeing anything about it.

I have a rather bad tongue tie, I can barely stick my tongue out of my mouth and when I do there is a line where the tie pulls back, im glad that in the end after the snip things went better..
i am very tempted to get mine cut too.. keep hurting myself haha

I've heard a lot of mummys have babies that struggle with this so it's great your raising more awareness about it :)

I can't believe it's only 4-11% that have a tongue-tie. In my NCT group of 6 I think at least 4 had a tongue-tie and all where girls. My daughter lost 14% but unfortunately getting the tongue-tie snipped did nothing to help her feeding. I'm glad it worked out for Debbie and Corey.

Glad the tongue-tie got sorted out! Much bigger percentage that I thought for it xo

I never actually knew what tongue tie was until reading this post, I'd read about it so many times, but we never breast fed so I never felt the need to find out! At least now I know - so glad it worked for yous!

This post will be so helpful for anyone going through it! We didn't breastfeed so I've never had to worry but I can imagine it's horrible xx

So glad it worked out well for you! I don't really know much about tongue tie so this is good to read ox