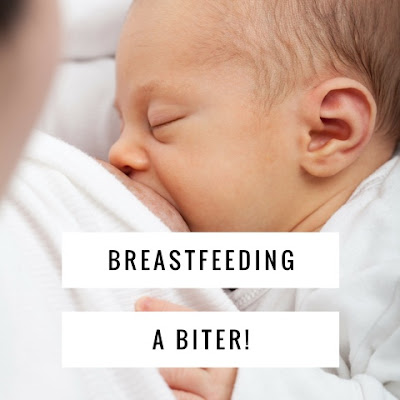 I know the title of this post sounds a bit scary and some people will be like "why are you breastfeeding your child when they have a set of teeth like jaws", however lots of babies get their teeth young and I wanted to share some tips and my experiences on breastfeeding a biter.

Let me start by saying that most babies won't bite whilst breastfeeding but there is a number of reasons why they can and do. I'm still feeding my daughter, who has recently turned two, and it's only been in the last year I've had issues with her biting and only a couple of incidents were her being cheeky.

If I remember correctly the first time she decided to have a nibble was when she was just over 1 year old and was more curious and alert when feeding. It wasn't too sore when she bit but it did of course hurt and when I took her off the breast and sternly said no she immediately had a cry because she didn't like the reaction I gave her. I'm sure she was just being curious but didn't expect me to get cross. After that I popped her back on the breast and she didn't bite me again.

The second time she had a bite, again she was being cheeky and I think she did it because I wasn't looking into her eyes lovingly whilst she was feeding. She basically nipped me, smiled and giggled then went back to feeding the wee monkey. I did stop to give her a telling off again and remind her that mummy's boobs are not for biting.

The older she got though and the more teeth she got sometimes lead to accidental biting and this leads me on nicely as to why sometimes babies do bite whilst breastfeeding.


Who's Bad
One of the most common reasons is a bad latch. If your baby isn't latched on properly and they have a set of teeth in their mouth that could rival jaws from 007 then you're going to feel a nip or two. It's obviously a little accident and easy to sort hopefully by popping your baby off the breast, getting comfy and in position then popping them back on.

Sweet Dreams
For Harlow right now the worst thing she does whilst breastfeeding is fall asleep and this is when her mouth starts to close gradually and basically clamps my nipple in her teeth. It's blooming sore but I know she doesn't mean it so I put my little finger into the corner of her mouth quickly to free my nipple so there's no damage.

Nosy Parker
Some babies are so nosy and whilst breastfeeding they never get a good look at what's going on. Naturally their nosy nature means that any movement/ noise must be investigated and of course they forget that mum's boob is in their mouth when they turn their heads quickly. Ouchie but hopefully it doesn't happen too often!

Cheeky Monkey
As I explained above, when Harlow first had a bite it was because she was probably curious as to what would happen and generally being a bit cheeky. Some babies can't help themselves.

Poorly Chops
If your baby has a cold or a stuffy nose then this won't do them any favours when feeding. It often means they find it hard to breath so frantically pull on your nipple to get the milk then take a quick breath then clamp back down to catch the milk. You can purchase baby nose aspirators to help remove the mucus before a feed so it's easier for them to breathe.

New Teeth
Teething can be another cause of biting in breastfed babies. If their gums are sore and they're in pain or feeling irritated, then they may bite to get relief. You can always rub their gums gentle with a clean finger before a feed or provide a cool teething toy that you can keep in the fridge.

That's some of the experiences I've had so far and what I've done to try and help. Have you had any experiences of your little one biting whilst breastfeeding?

7 comments on "Breastfeeding a Biter!"

Good post, love this sharing so much, thank you!

My eldest was a biter, she got her first 2 teeth at 4 months and bit a lot. She did it as a toddler too because she found it incredibly funny. My youngest who is just coming up to 18 months has never bitten me. She will clamp down occasionally as she's falling sleep but other than that I've been lucky this time!

This was something I always really worried about. As it turned out, I stopped breastfeeding way before he got any teeth, but this is really good to know for next time when I hope I'll be in a better place for breastfeeding longer!

I am bookmarking this ready for number two!

ouchie! I cant imagine a biter, i see my youngest bite her bottle teat and i shudder haha! my aunt had a biter, she would look up at her, smile and bite down.. she soon stopped breastfeeding thats for sure haha

This is something that makes me glad we didn't last that long haha! xo

My son (just turned 1) cries at the word "no" so whilst he has bitten me about 3 times (being cheeky), each time I stopped him and said no. Just like your little one, he'd cry at having hurt me and then after about 30 seconds I'd tell him it was okay and put him back on. He then didn't bite again for a good few months thankfully x