Back in November the family and I had another little trip up North to the lovely cottage we booked previously in Berriedale, near Wick. We all love travelling further up the Scottish highlands and the cottage we book is right beside the sea. It's beautiful. The cottage is also fab because there's no TV, wifi or mobile reception so we really can escape from the world. With kids though it means some form of entertainment is required so when we were sent a copy of Rhino Hero to review I gladly agreed. 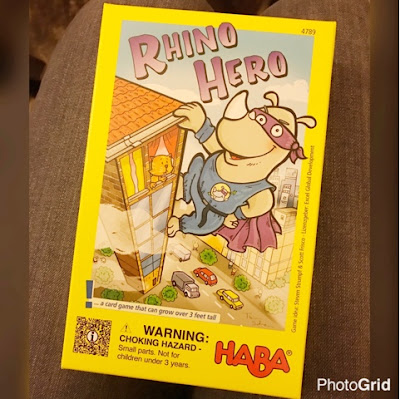 Rhino Hero is one of this years must have games with it's awesome 3D card stacking ability putting the fun back into after Christmas dinner games. You'll need a bit of a steady hand but this really is a game for all the family. The game can be played by 2-5 players and have some quick and simple easy to follow instructions for immediate play. Included with this game is 31 roof cards (a.k.a action cards), 28 walls, 1 foundation (a.k.a starting card), 1 Rhino Hero and of course some instructions. Depending on the number of players the game can take between 5-15 minutes to play and it really can be quite addictive. 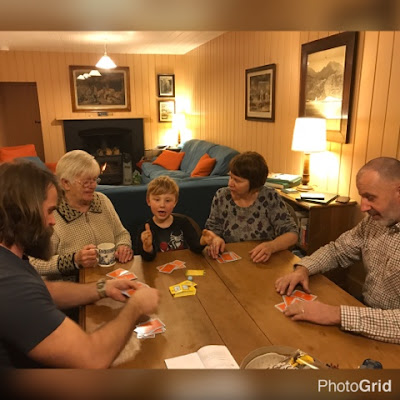 So what is the game idea? Well you've to build a house of cards, floor by floor, as tall as you can for Rhino Hero. Just like a real house it is made up of walls and ceilings. As you never know how tall it will become the ceilings look like a roof. The marks on the roof determine how the walls of the following floor have to be erected, and the symbols on the roof determine certain building conditions, which might mix things up a bit. The aim of the game is to be the first to have placed one's roof cards i.e. you have none left in your hand. 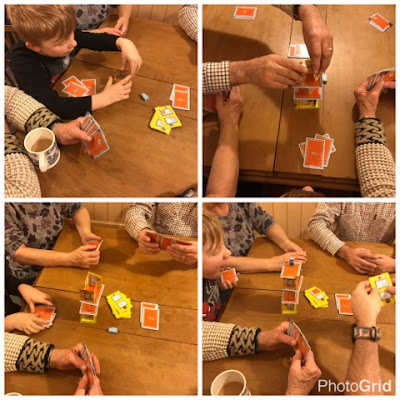 Before starting to play you need to prepare. You do this by placing the foundation card with either side face up in the centre of the table. The easy side has two wall marks the hard side has one. You then shuffle the roof cards and give out five to every player. If there's only two players then take seven cards each. The remaining roof cards are put in a provision pile away from the foundations. You then get the walls and Rhino Hero ready. 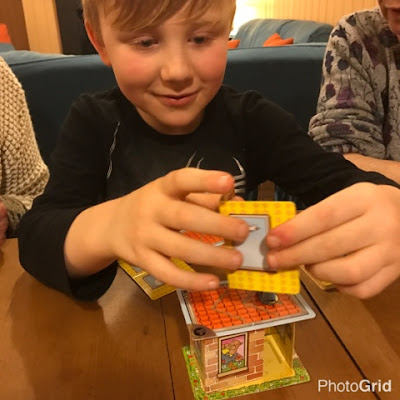 Rhino Hero doesn't need a dice so the game is played in a clockwise direction with generally the youngest player going first. Or whoever has done a good deed that day! This game is basically building a house of cards with a few tweaks throw in to keep it interesting. Some of the roof cards have special symbols. There's a change of direction card which means if you were playing clockwise then you simply play anti-clockwise now. The exclamation mark card means take a breather so the next player has to take a rest and lose a turn. The plus one symbol means the next player has to draw a new roof card from the provision pile before they start to build. There's a couple of other symbols including one for Rhino Hero which was by far the favourite in our family. It means the next player has to move Rhino Hero from where ever he is to the new Rhino Hero mark. 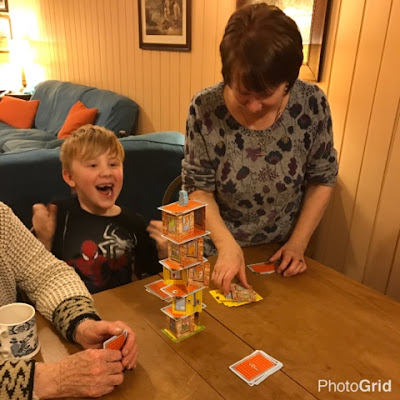 This was a really exciting and fun game to play, it even got quite tense at times but what a laugh everyone had. The more players (up to 5) the better really as it can get competitive and you become quite strategic when you have the right cards. Logan loved this game very much. He had no bother balancing the wall cards, placing the roof or moving Rhino Hero around so I'd definitely recommend for children of his age (7). It's a 5+ game and is surprising cheap at only £6.60 currently on Amazon.

If it's not on your child's Christmas wish list (or yours) then definitely put it on. Or why not enter my giveaway below to be in with a chance of winning a Rhino Hero of your own? Worth a shot.

I love Top Trumps and Uno!

Memory game. My son is really good at it 😀

SNAP WITH THE KIDS

It would have to be Uno

pairs we love, but Archie really loves the spotty dog game for Orchards

I love exploding kittens and the kids love to play dobble

Has to be Uno, we all love to play this

Love playing Uno and Top Trumps with the grandchildren :)

has to be snap

We have just started playing what we used to call "Popawally" - I am sure there's another name for it. You deal all the players 3 cards each and they pick up a card from the unused stack in turn. You need 3 cards of the same suit going up to 21, or you can stick if you think you are closer and no-one else will get "Popawally". If you get cards making 21 you have to shout "Popawally" and make a silly face (that's a new rule we've just made up). :)

Uno it is always a laugh :)