Stories are a massive hit in our house with both the kids loving their bedtime reading. One thing we've never really done though is actually tell stories and by this I mean make up a tall tale from our imaginations and see where it takes us. I loved being told made up stories from my great gran Tod when I was really little and recently Rory's Story Cubes brought all the memories flooding back.

Rory's Story Cubes have launched the new and exciting Batman and Moomin versions for fans to get their hands on. Logan was sent the Batman version to review and I was quite intrigued. I wasn't sure if it would be like story stones to follow on with a book or if it would be something different altogether like a game of sorts. It was in fact billed as a sort of game but one that's not really competitive and is just for great fun and family story telling. 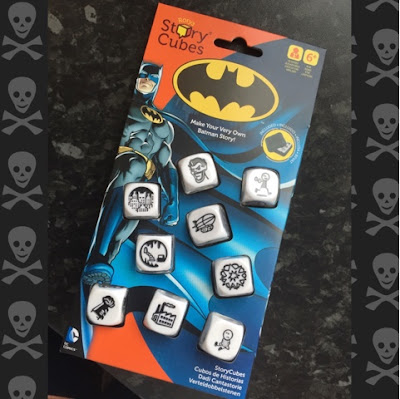 In the story cubes pack the box contains 9 different dice (the cubes) each with 6 unique Batman symbols on each side. That's 54 symbols by the way. There's a how to play guide and when you flip it over there's an icon guide on the back which tells you what all the different symbols mean. As well as this there's a handy little travel case which I love and fits perfectly in the palm of your hand. Excellent for when travelling.

It's very simple and easy to play with the story cubes. You can either play on your own by shaking the dice in your hands, rolling all 9 then making up your very own story from the symbols you see or you can play with family and friends. It's exactly the same but this time you can take turns being the narrator or if it's a large group you can give people 3 story cubes each and each person has to tell a part of the Batman story. The only rule is that there is no wrong answers. Some of the symbols are things like a bag of money but this could represent a bank robbery, payment to a nasty criminal or maybe someone's had a lottery win! You can let your imagination run wild with these Rory's Story Cubes. 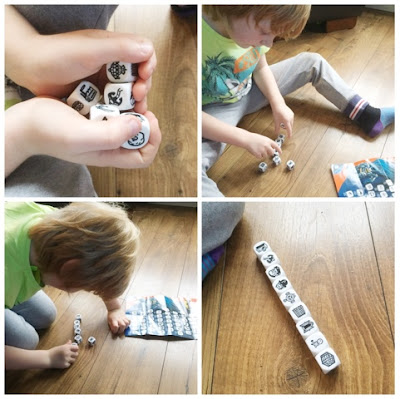 Logan really enjoyed playing with his set of story cubes and it was perfect for a nice bit of quiet play that encourages concentration, imagination and language development. It's aimed at the 6 years + to adult market so was perfect for us. We would take turns telling each other a brilliantly action packed Batman story from the 9 dice we rolled. The pair of us would often chip in to each others story and takes turns so it was really good fun. It meant I got to spend some quality time with Logan too instead of having Harlow hanging off my arms and legs squealing in our ears, the wee monkey.

The only thing that is a bit of a shame is that the guide sheet doesn't fit into the amazing travel case that comes with the story cubes which is kind of annoying as I'm worried about losing the sheet. It wouldn't be so bad if I knew all the symbol names but there are 54 like I said and my brain really isn't what it used to be after two kids ha ha. 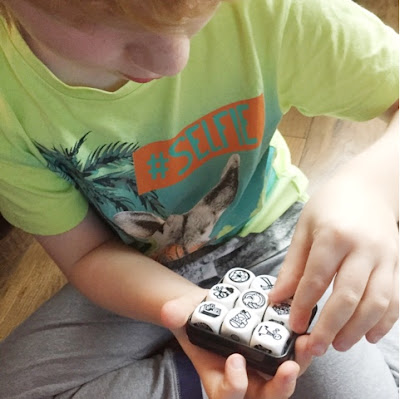 Overall Rory's Story Cubes Batman edition is a fab story telling game with an equally fab retail price of only £11.99. It's perfect to get the creative juices flowing and you can be as serious or as silly as you like when telling your story. I'd definitely recommend to friends and family, it's the perfect extra gift to put in with the kids birthday and Christmas presents.

If you would like to be in with a chance of winning your very own Rory's Story Cubes Batman edition then simply enter via the rafflecopter widget below. Good Luck! 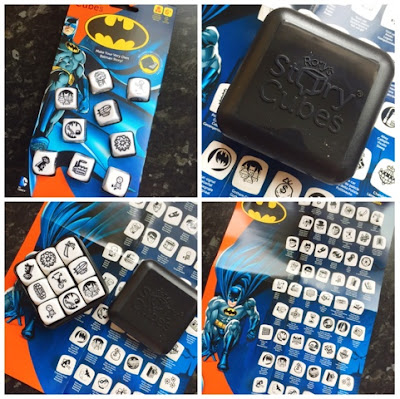 I was sent a copy of Rory's Story Cubes Batman edition in return for an honest review.

Got to love Batman, especially in the latest movie...how can you not? :)

Batman is our absolute favourite character! We love story cubes and these would be perfect for my little super hero lover! X

My two boys would love batman :) thankyou for the chance.

My son loves Batman. His favorite!

It has to be Batman himself. :)

It would be Robin: always on the sideline and yet he makes a big difference!

I like catwoman's style, but my little boy is all about Batman himself.

It has to be the Joker for us. He is fantastic. fingers crossed for this

Robin - the sidekick for me !

These are cool. Have had similar ones in the past. Lots of fun. Brings out the imagination.

It's got to be the one only batman

The Joker - especially when portrayed by Heath Ledger

My favourite is The Penguin

My favourite is The Penguin

I love the joker, and Alfred of course :-)

Harley Quinn is my favourite character from Batman

Batman he ROCKS IT as a superhero.

I love The Joker, I always prefer the villains and bad boys!

Robin, I always had to be Robin when we played Batman as kids. :-)

Has to be Batman and Poison Ivy. :)