This year has been the year of travel and mini breaks for my family. It’s been fab visiting new places and making awesome memories together, Logan enjoys it so much in fact he’s been asking to have a break away every weekend! Although the breaks are great it’s often hard to think of which toys and games to take to fill in the down time between exciting adventures. Some toys and games are far too big and cumbersome so clearly not ideal for travel when you’re cramming in so much stuff as it is. For this reason I was very thankful when Orchard Toys offered Logan the chance to review one of their new Mini Games.

The mini games range was launched in May this year with 6 different small, portable and travel sized games to play and enjoy. Based on traditional family favourites, the range gives classic games a fun ‘Orchard Toys’ twist! Included in the range is Dinosaur Dominoes, Little Bus Lotto, Jungle Snakes & Ladders, Build a Beetle, Crocodile Snap and Penguin Pairs. Logan was sent the lovely Jungle Snakes & Ladders to review and I have to admit it isn’t a game we’ve played that often so I was looking forward to trying it out. 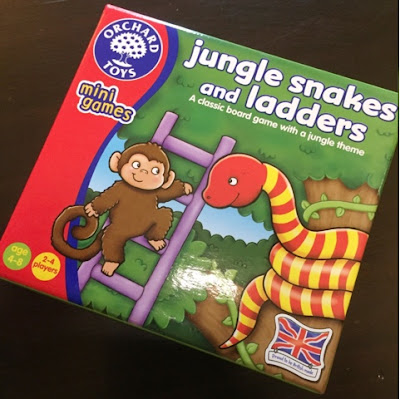 The game is jungle themed, as you can gather from the title, and is a mini version of the popular family favourite snakes and ladders. To play the game players must avoid the slithering snakes to climb the ladders to the finish line and join the cheeky monkeys which feature on the board throughout. It's aimed at 4-8 years olds for 2-4 players and the board itself comes as a 6 piece jigsaw which you have to build before being able to play. Also included are 4 different coloured counters and a dice. It’s simple and basic but really that’s what you want from a transportable game, the less pieces the less chance of anything being lost or misplaced whilst travelling. The game comes in a small thin compact brightly coloured box which hardly takes up any room when travelling so is perfect for popping in the suitcase, rucksack or hand luggage when on your journey with the kids.

Logan and I really enjoyed this game. It’s so easy to set up and play within seconds and the concept of the going down the snakes and up the ladders was grasped pretty quickly from Logan’s end. Each game that we played lasted about 10 minutes but we did the best out of 5 etc so you can keep it going for quite a while if you like. Of course if your child is younger (Logan’s 6) then the game may last a bit longer for you. 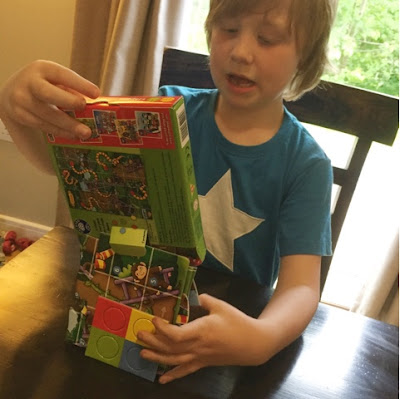 Here’s a little bit about the other mini games available: “Dinosaur Dominoes is a fun dinosaur-themed game with cute, colourful dinosaurs that both girls and boys will love. Featuring 28 colourful dominoes, children will enjoy talking about the different types of dinosaurs they can see on the cards! Little Bus Lotto is an animal-themed lotto game featuring 24 animal characters who all want to board the Orchard Toys bus! While children collect animal passengers, they will also love seeing and talking about what activities they are up to on the bus. Based on the classic game of Beetle Drive, Build a Beetle features four smiley and quirky beetle characters which children must match, body part by body part. Fun and laughter are guaranteed as players try to be the first to build their beetle! Crocodile Snap is a fun twist on the traditional game of snap, with quirky animal characters including superhero crocodiles and gorillas drinking tea! Players shout out ‘snap!’ for matching pairs, but when they spot a pair of crocodiles they must ‘snap’ their arms instead! Penguin Pairs features 32 colourful shaped penguin character cards to match. Suitable as a single player activity or a multi-player game, children will love matching the quirky penguin characters in their cool costumes from around the world!” 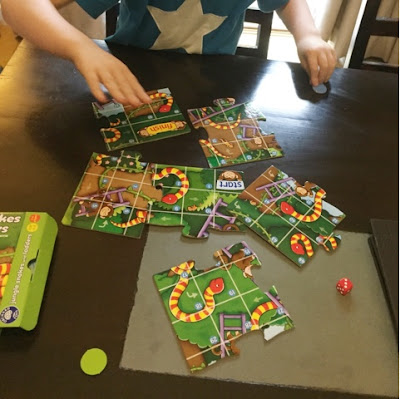 Each mini game is priced at a very reasonable £4.99 and I won’t hesitate to buy a couple more for our travels in a few months. The Jungle Snakes & Ladders game pays particular attention to developing children’s personal and social skills as well as encouraging number and counting skills. The social skills is a big one for Logan since he’s autistic so playing this game a few times and showing him he can’t win all the time is good for him. I’ll admit it’s not easy and he takes losing quite badly but I’m trying to teach him he can’t be good at everything and this game does help. It’s good to know that Orchard Toys design all their products with support from educational advisers including teachers, nursery practitioners, Early Years professionals and children themselves. It gives me confidence in the game and although snakes and ladders is a classic it’s handy having the familiar Orchard Toys characters that Logan’s familiar with. Orchard Toys are also one of the few British toy companies that still manufacture in the UK which I love and their games, puzzles and packaging are made using 100% recycled board. 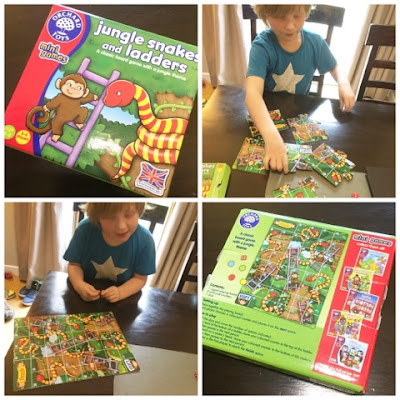 Overall the snakes and ladders mini game was great, super colourful, well priced and perfect for our travels. I can’t wait to purchase and try a few more for our next trip.

I was given this Orchard Toys mini game of snakes and ladders in return for an honest review.