Our Easter Holiday Trip to Legoland

During the Easter school holidays the family and I embarked on our first ever trip to Legoland Windsor. Logan had been asking to go for well over a year (he spotted the TV adverts) so I finally caved and agreed to a little long weekend down South. Since it was such a long trip for us (Google said 7hrs it was actually over 8 due to traffic) I decided to go all out and stay in the actual Legoland resort hotel and get a fully themed room.

There’s a few different room styles to choose from but we went for the pirate theme and asked for a room with a view over the park as well. It was well worth it to see Logan’s face when we entered our room for the first time, he was so excited. It was super cool with pirate Lego themed wallpaper, carpet and of course ornaments decorating the walls. The room was divided with the double bed at the far end, bathroom next to that then a little corridor to the bunk beds near the room door. It was quite spacious and more than enough room for the 4 of us. To be honest we didn’t spend loads of time in our room as we were too busy having fun at the park then going swimming after dinner but it was nice to have. 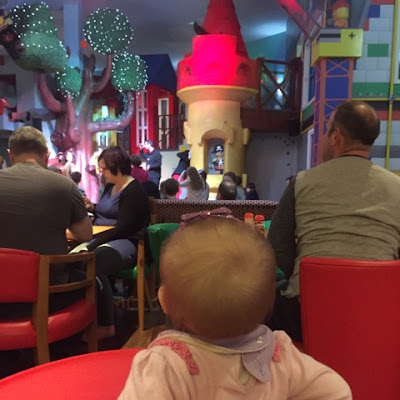 When we finally all arrived on the first night, after an epic 8hr drive by the other half, we grabbed some grub from the skyline bar and sat down to watch some of the kids entertainment. Logan was more interested in this than eating dinner even though he was starving, I think all the excitement of finally arriving made him forget how hungry he was. Reception had informed us of the kids entertainment available in the hotel and I was surprise to see that it was on from 7.30am to 9.30am in the mornings. So if you’ve got early risers there’s no need to worry about keeping them busy. There was also a games room full of xbox’s with Lego games and a fab play park outside just before you enter the Legoland Theme Park. If that’s not all after your day at the park the kids entertainment then picks up again at 5.30pm and finishes off at 8.45pm. Tons of stuff to keep the kids busy and tire them out. 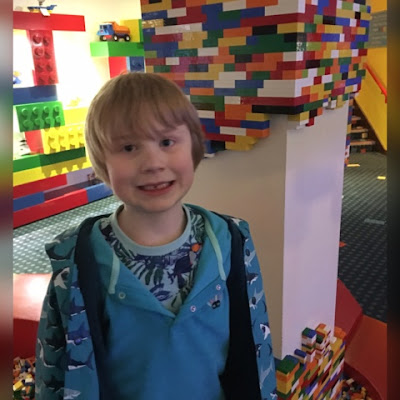 After a good nights rest we were up bright and early for some breakfast in the Bricks Family Restaurant. It’s buffet style all day for breakfast, lunch and dinner and the food offerings are quite good. Everything was quite tasty and they even had a little island in the middle with simple children’s options so perfect if there’s any fussy eaters. The Bricks restaurant gets quite busy so Legoland have introduced a booking system which means you have to book your breakfast and dinner time slots in advance. I did this a few days before we travelled down and it was totally fine. I booked in for breakfast every morning at 9am (as the park didn’t open for hotel guests till 9.30am and I wasn’t going to start queuing) and it didn’t matter if you were a bit early the staff still let you in. Dinner I booked for around 5.30pm and again this was fine if you arrived early when you’d finished at the park as it wasn’t really busy at this time. 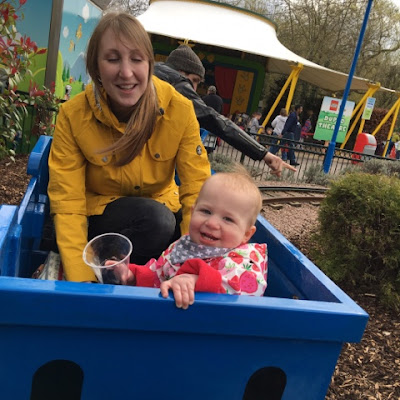 During breakfast Logan would normally run around playing or nipping to the xbox room to play some games. Everything was within eyesight of the Bricks restaurant and skyline bar so there were no worries of him getting lost etc which is really handy. At 9.30am the theme park opened to hotel guests only (normally opens at 10am) so the family and I would head in just after. Only a few rides in the Lego City part of the park were open which was fine as by the time you’d queued to get on one ride the rest of the park was open. 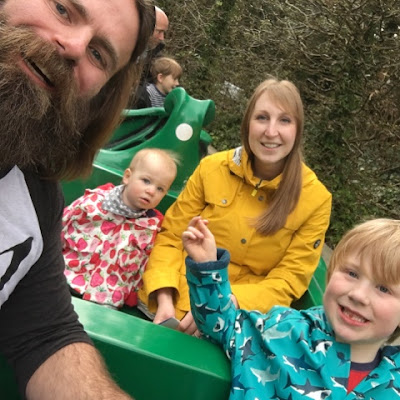 Since Logan’s autistic, Legoland offer a ride access pass to people who need a bit of extra support when visiting their theme park. It basically means that instead of Logan stressing out in the massive queues (especially during the Easter holidays) he got to use his ride access pass to go into the ride via the Q-Bot/Exit route. This was a massive help and really made things so much easier for Logan. There of course were a few meltdowns when he didn’t quite understand what was going on but no one even batted an eyelid and everyone I spoke to was very understanding, both staff and the public which was refreshing. The ride access pass can be obtained from the helpdesk office in the Heartlake City part of the park and we always headed there first thing to get the pass on both days we were there. All the family have to be there as you get a special hand stamp plus the actual pass itself which entitles the user to access 10 rides via the Q-Bot/Exit route. We never used all 10 stamps on both days so it’s plenty, oh and to get the pass you need to take some form of proof i.e. I had a doctors letter stating that Logan has been diagnosed with autism. 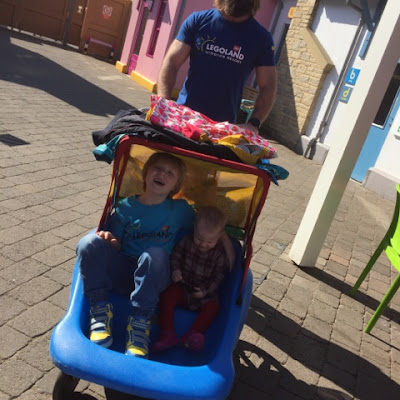 The theme park itself is massive! We never managed to get round all of the rides on the first day and that was with the access pass so it’s well worth having 2 days at the park if you can. One really handy piece of advice for parents with toddlers or kids who struggle to walk far is to hire one of the parks buggies. They’re cool little plastic carriages which are easy to push older kids in and also keep little ones safe at the same time. It’s perfect for dumping all your bits and bobs on too so I’d highly recommend. It’s not cheap to hire at £9 for a single and £14 (I think) for a double as you don’t get the money back but it was a life saver for us. Logan hates walking so to prevent a lot of meltdowns this was essential. After a full day at the park from 9.30am to 5.30pm I felt like jumping in the buggy myself! 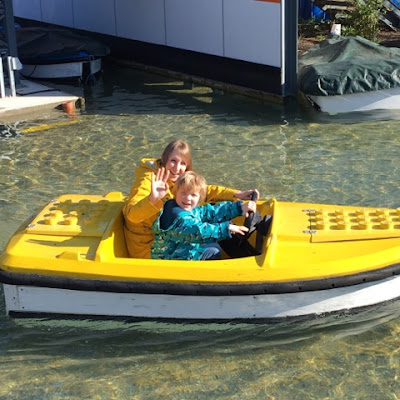 Some of Logan’s favourite rides included the Jolly Rocker pirate ship which is like a massive pendulum that swings back and forward really high. The Coastguard HQ where you could drive your own little boat around the river. The Dragon which I think must be the parks biggest rollercoaster and the Spinning Spider which was like a bigger version of tea cups spinning round and round. All very much great fun and these were only a handful of rides available at the park as well as some other cool stuff like the Lego Star Wars Miniland Model Display and the Lego 4D Movie Theatre. 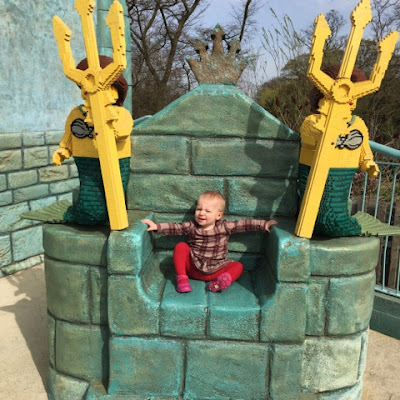 After a busy day at the park Logan still had enough energy to head to the hotel’s swimming pool which is really good. It’s not massive and it has a separate pool for swimming and a leisure part for the kids to soak each other with water and use the little slides but it was perfect for what it was. It was never busy either but you would get a little wrist band that would at least guarantee you an hour in the pool.

The whole family and I really did have a fantastic time. We were so busy from start to finish that the 4 days we were down there went by in a blur, the other half and I couldn't believe it when we woke up on the last day and it was time to go home! I'll need to get booking our next trip now. 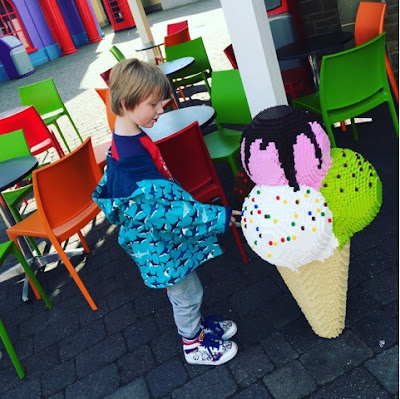 2 comments on "Our Easter Holiday Trip to Legoland"

Sounds great. Brought back memories of when we went with the kids many years ago (probably about 17 or 18 years ago) The kids were quite young at the time. I'm sure I've got photos of us on the boats and at the driving school. They loved the little driving licences that you got. Still got loads of Lego in the attic. Big Lego fans in this house.

Aww Angela we loved it :)

So glad it's brought back some lovely memories. We bought Logan the driving licence too, I'm sure you'll see him wearing it at some point.

We're all mad Lego fans over here, you're in good company :D