Since the sun has been shining a bit more I’ve had to think about changing the kids winter jackets so they’re not getting too hot and sweaty when we’re out and about. This especially applies to Logan, he gets so hot so quickly and often doesn’t want to wear a jacket at all so finding him the right garment to wear can be tricky. Fortunately for us I was recently asked if Logan and Harlow would like to test out Hatley’s new raincoats. Of course I eagerly agreed and perused the new raincoat prints with glee. I’m not sure if you’re familiar with Hatley but their designs are so vivid and eye catching, you can basically spot their range a mile off. 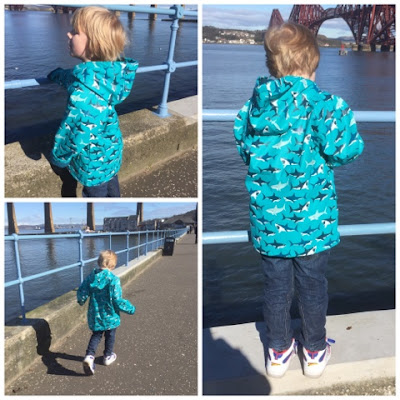 Here’s a little bit of background information directly from Hatley: “It started over twenty years ago with a sense of humour, a talented painter Alice Oldland, her restless husband John, and The Little Blue House gift store in the lakeside village of North Hatley, Canada. Alice, inspired by the countryside around her, had just finished a series of paintings depicting farmyard animals. Needing a venue to show her work, Alice opened a gallery above her gift shop The Little Blue House. John watched the paintings sell and thought he could create a line of aprons based on Alice’s artwork. John was right, the aprons sold and kept on selling. They quickly turned this cottage business into the company Hatley, supplying retailers with the best cow and pig aprons the world had ever seen. Cows and pigs gave birth to moose and bears, aprons led to gifts and clothing. Hatley thrived, but it was all so much work and John and Alice were looking for a life less complicated.

When retirement beckoned, John and Alice happily handed the reins to their three sons, Chris, Nick and Jeremy. Chris – the eldest decided he should be president, Nick – the only one who could draw became the designer, and Jeremy – the youngest, desperate to boss somebody around took over production. Restless like their father, the three boys quickly transformed and grew the company. They developed an extensive children’s line, created comfy women’s sleepwear and expanded into the gift market with napkins, kitchen textiles, mugs and much, much more. Hatley designs are now sold around the world, and the three boys continue to ensure that Hatley stands for the same principles on which it started: family, good design, quality and of course, loads of laughs.” 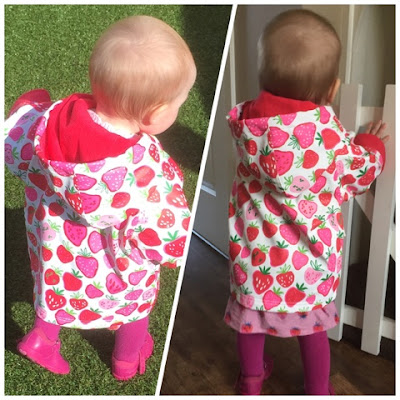 After much thought and drooling over the fab designs I asked if Logan could have the awesome Great White Sharks raincoat and if Harlow could have the Strawberry Sundae Baby raincoat. Both jackets are bright, bold and completely stunning – even more so in the flesh than online. The boys raincoats can be purchased in sizes 2-12 years and the baby raincoats are from 6-24 months. Logan received a size 8 years jacket as he’s getting quite tall and is in 7-8 year clothes at the moment (he’s 6 years old) and Harlow received a size 12-18 months. I remember purchasing a Hatley raincoat for Logan years ago from Selfridges in London and I knew the sizing was quite generous but the jacket literally lasted almost 2 years.

As I’ve mentioned Logan is quite tall so I ordered the size 8 to accommodate. When he tried the jacket on though it’s very generous so I’ve had to roll his sleeves up. Maybe a size 7 would have suited fine but the size 8 still looks good with the sleeves rolled up and he’ll get maximum wear out of it. As for Harlow, she has the opposite problem to Logan. She’s small and petite weighing only around 21lbs at 14 months old so the 12-18 months raincoat is generous on her too. I’d rather the bigger size though so it lasts longer. I’ve just rolled her sleeves up as well and it looks fab. You can see this for yourself from the photos. 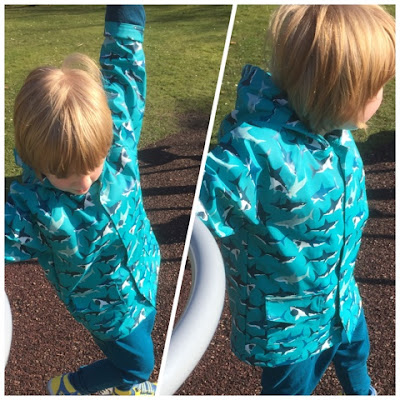 One thing I normally loathe about raincoats is that if you start to get a little hot the jacket becomes sweaty and literally sticks to you. Not so with the Hatley raincoats as these have a terry lining which is great for keeping the wind chill at bay and also to prevent major sticky sweatness in the jacket. Logan has often complained about other raincoats sticking to him, and he hates this, however he’s never once mentioned this when it comes to the Hatley coats.

The Great White Sharks raincoat can be purchased for a reasonable £35 and the Strawberry Sundae Baby raincoat for £33. They’re waterproof, have snap closure studs which are easy for little hands, PVC free, have hoods and are completely machine washable. The snap closure studs are great because they snap into place easily and hold their place without coming apart but when you want to take the raincoat off a quick pop pop and you’re done. As well as being machine washable these jackets are easily wiped. I’ve often seen Harlow with a chocolate or food stain on the sleeves or chest of the jacket and it wipes off no bother with a wet wipe. I’ve only had to wash if something’s been spilled or the jackets been really muddy from being dropped etc. 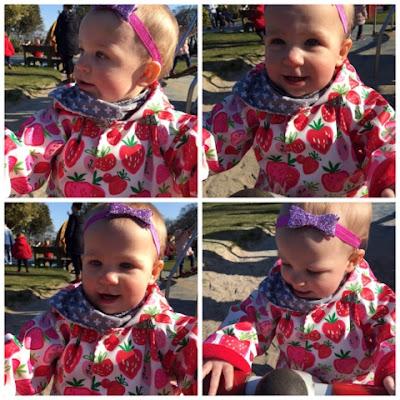 Overall Logan and Harlow love their new raincoats and everywhere they go with them on they always get loads of compliments. I wish they did them in adult sizes! For more information and to purchase your child their very own Hatley raincoat please visit www.hatley.com. You can also see what they get up to on Facebook and Twitter so why not pop over and say hello!

We received 2 raincoats in return for an honest review.