My baby girl is now 13 months old and what a busy last month we've had. Since she's now on the move a lot more I've been taking her to a few new groups in and around our local area. I always think it's good to get out and about with your little ones if you can, and although it can be a struggle for mums and dads sometimes it's great for the wee ones to mix with other kids and get some social interaction. Harlow and I have been going to our local toddlers group which is wild but so much fun and everyone's friendly. We joined a new music group which is pretty great and I've also been taking her to some baby gymnastics classes on the recommendation of a friend. It's a great little group and the kids basically run around and do what they like which is perfect. When they're so little they never really listen so freedom to run riot is fantastic. 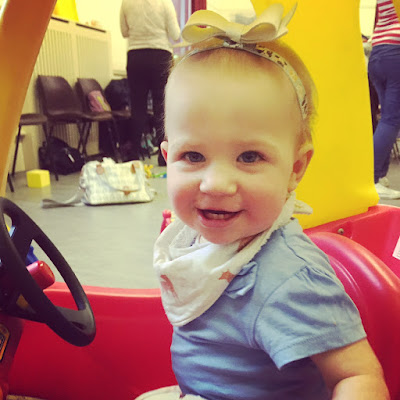 She had her much dreaded immunisations a few weeks back and thankfully Daddy was there to hold her as I get a bit emotional about it all. Daddy informs me she wasn't as strong as her big brother so was easier to hold, poor lamb. Thankfully it's 3 quick injections but she wasn't happy about it at all as you can imagine. Luckily the boob saved the day and after a quick breastfeed she was feeling much happier.

Harlow is quite the chatty little monkey and often shouts Dadada and Mmmum but we're not sure if these are actually directed at us in any way or if she's just playing with sounds. She does definitely know who her Mummy and Daddy are though and of course her big brother. She loves him so much and they've been getting on so well recently it melts my heart. 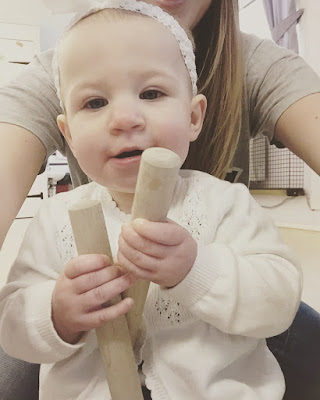 Miss diva chops can climb the stairs with ease now and bad Mummy here has forgotten to lock the child gate a few times! She sounds like a baby elephant climbing them, which is strange as she's like a ninja most of the time, so I always catch her. Note to self to keep those pesky baby gates locked at the back of me from now on. Continuing on the diva theme Harlow now doesn't want to sit in a baby bath seat anymore. She kept climbing out of hers which wasn't safe at all so she now just sits in the bath with her big brother when it's bath time. She seems to prefer this a lot more and there's less climbing around so definitely safer. 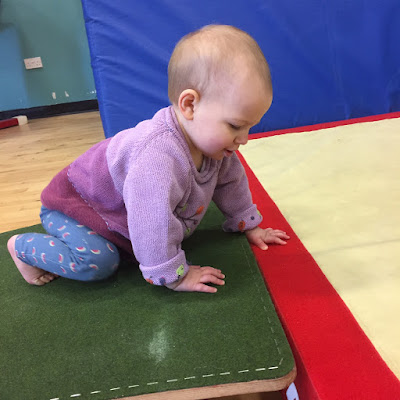 My little princess is still in 9-12 month clothes but eats like a horse! I think it's the constant moving that keeps her so slim now. She does laps from the living room to the hall to the kitchen and back again about a million times when we're in the house. There's a cupboard in the kitchen which I keep all the kids snacks in and she's figured this out already so is constantly snooping around in that cupboard to see what she can get her greedy hands on. Harlow is so greedy in fact I've caught her eating the dogs food a few times! It's dry dog food thankfully so I just pick it out of her mouth, the rascal, but she quite likes to tip the dogs water bowl upside down now and again which is a right pain. Oh and before I forget she got her first proper pair of walker shoes, hurrah! Definitely a big girl now.

The other half and I had been planning a cake smash for Harlow for her first birthday but never quite got round to it until last week. It was a great day and Harlow did so well, she did go diva on us come the end and refused to get photographed but the photographer had the images she needed so we were all good. We'll be getting the photos back from the shoot soon and I can't wait to see them but here's a little peak from behind the scenes. 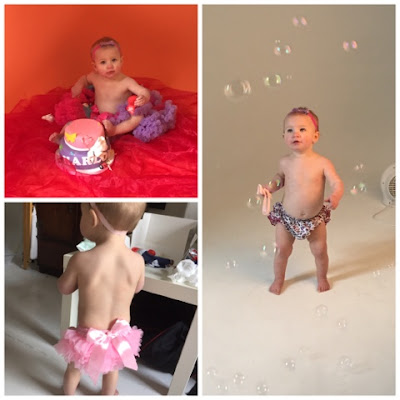