Having been invited to the Foodies Festival in Edinburgh earlier this year, the other half and I were thrilled to find out that there would be a Christmas Foodies Festival happening in Edinburgh too. We love our grub and couldn't wait to see what treats were in store for us this time round. The festival took place last weekend and we went along on Sunday to see what it was all about. Logan got dropped off at his Granny and Grandads, as it's not really his thing, and we headed on through with baby Harlow in tow.

Instead of being held outside the Christmas Foodies Festival was thankfully held indoors at Edinburgh's International Conference Centre. Sunday was a miserable rainy day so it was perfect to pop indoors, keep warm and browse some amazing foodie stalls. The festival opened at 10am but we rocked up at just after 11am and it was pretty busy already. Since the festival was so big it was split into two different halls, one with the cookery demos and stalls you could buy lunch etc and the other was mostly artisan stall holders.


There was so much to do and see at the festival we spent a good 4-5 hours there and the time literally flew by! The artisan part of the market was lovely with over 150 different food producers from around Scotland. There was everything from cheeses, chutneys, chocolates, sauces and jams, biscuits and crackers, cakes, puddings and even mead. It was great as it meant the hubby and I could pick up some tasty Christmas presents for our loved ones, well that's if I don't eat/ drink everything first.

A Vegan area was included in the festival which was lovely to see and of course there was a Scottish Gin theatre for all you gin lovers out there. One thing which was really quite good was the Elf Cookery School for children under 12. Kids could basically bake and decorate snowballs, gingerbread men, cookies and cupcakes. I saw lots of kids taking part and if we had brought Logan along I would have let him join in too. 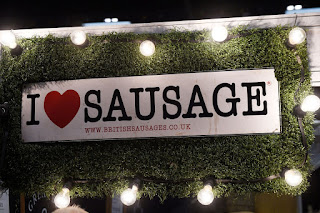 In the main hall there was a stage which had live music throughout, it really was a lovely Christmassy atmosphere. You could even enter a chilly eating competition, register a team to compete in the Christmas Bumper Quiz and have a group Christmas jumper picture taken in the photo booth if you really wanted to.

We mainly had a good walk around all the stalls sampling what each one had to offer and buying the odd bits and bobs here and there. We found a lovely whisky stall which housed the Douglas Laing boys and some lovely malt whisky blends. Then we found a stall housing a company called The Rookery who specialise in some tasty Mead, all hand crafted by the way. All of the stall holders were very friendly and quite a few were willing to cut some deals on the day so it's always worth a little haggle sometimes. We had a great time and will definitely be attending future Foodies Festivals.

The other half and I were given tickets to attend this event. All opinions are my own and completely honest.