As most of you will know my son, Logan, is autistic and he often feels the need to chew. Whether it be his hands, fingers, clothing etc. He's always chewing or fiddling away with something. For this reason I've tried out a few different sensory chew aids, such as pendants, for him to wear and chew as he sees fit however none have ever lasted and he even chewed through one in a couple of days. The other half and I weren't sure what to try next and that's when I spotted Chewigem on Dragon's Den of all places! Of course I got in touch with them straight away to see if Logan could try out some of their products.

A little bit about Chewigem first: "Whilst on maternity leave, Jenny McLaughlan and husband Stuart, came up with the idea for a necklace that would be safe for babies to chew on whilst teething. As a result GUMIGEM ® was born. However, it became apparent that there was another market interested in these necklaces. They began to receive a lot of emails from thrilled parents of Autistic children or parents of children with other sensory disorders that found the necklaces a godsend. These emails touched a nerve with the couple and they investigated the market further. It filled them with such joy to be providing a product that was benefiting these children so much, that they set out to launch a site dedicated to these customers who have the need to chew." 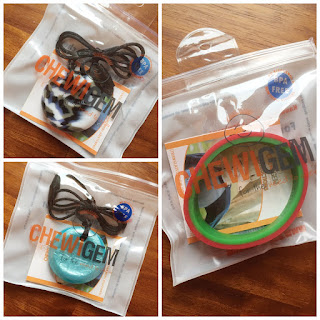 So Chewigem was born from the idea of Gumigem. It's brilliant really as there's so many fab teething necklaces out there on the market but I always find it hard to track down a good sensory chew necklace or pendant for Logan. He's such a heavy chewer that everything gets chomped into tiny pieces! This in turn costs me a lot of pennies as you can imagine as I'd rather he chewed the pendants than his hands.

Normally when you visit a shop/ website which sells sensory aids they only have a handful of chew items so I was really surprised to see that Chewigem have quite the collection on their site. There's at least 20 different types of products to choose from which is fantastic. Chewigem is UK based and provide a range of chewable jewellery designed to meet the needs of children and adults who basically need to chew. The products available are non toxic, stylish, come in a wide range of colours and are also quite discreet compared to other products on the market. They are made from a similar material to that of most baby teethers so completely safe. Since I needed something hard wearing for Logan to chew I choose to review two Button Pendants and one of the Emotichew bangles.

The button pendants Logan received were the Cadet and Splash design. They came in their own little zip lock bag, which is handy for keeping them clean and dust free and also for transporting. Logan loves both designs however the Splash is his current favourite since it's blue as that's his favourite colour. As you can see from the photos the button pendants are a round disc shape and are quite thick. They sink in slightly in the middle as if you've pushed your thumb into them. It's a brilliant shape and works well for Logan to hold and chew. The button pendants are the strongest chews Chewigem have hence the reason I chose these. I like that they come with quite a long cord so that you can shorten if you so wish however Logan was happy to have his long. The necklace fixes together with a break away clip which is safe for children to wear and easy to use. 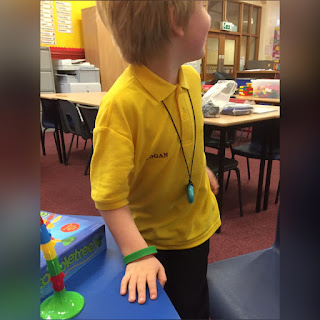 I'm happy to say that the pendants have been super durable with Logan's aggressive chewing and because they're quite thick they've lasted the longest out of any sensory chew he's had. We received these at the start of September and now into October and they're still going strong with no marks to the pendant what so ever! He has had the odd nibble on the material used for the cord and although it has a couple of little threads coming off it's still holding up to the onslaught.

The Emotichew bangle is a fabulous idea, having both a green and red side to it which can be turned either way. Green for when your happy and approachable and red when you may be sad and need some space for a while. Logan did understand the concept of this bangle however I'm not sure he knew how to really use it when he needed it so it hasn't worked for him so far. Maybe when he's a bit older it'll help. He kept taking it off at school as well and it got lost a few times. Thankfully the staff found it again so we're leaving this one for the time being. It's still an awesome design and Logan has been nibbling on it. There don't appear to be any marks or signs of cracking etc, I'm happy with it. 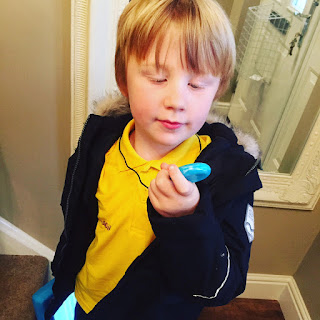 The Button Pendants and Emotichew can be purchased directly from www.chewigem.co.uk and they also have a sale on at the moment which you must check out. The Button Pendants retail for £12.95 and the Emotichew retails for £7.95 (child's version). Delivery is free if you spend over £40 and if you like Chewigem on Facebook you can get an extra 10% off!

Overall brilliant sensory aid chew products at an equally great price. I'm so pleased they've lasted more than a week and over a month is unheard of for Logan so really really pleased with that. Apart from him not quite getting to grips with the Emotichew it's still a fab product and probably when he's older he'll use it. The fact that they do an adults version is really good too. Logan wears his pendants to school every day now and we'll be using them for the foreseeable future.

Please visit www.chewigem.co.uk for more products and information. You can also see what they get up to on Facebook and Twitter so why not pop over and say hello.

I was sent two button pendants and an emotichew bangle in return for an honest review.

I have heard so many good things about these for children who need that oral stimulation. I'm glad it's been good for you #triedtested

They're really great Emma and the first one's which we've had that actually last :)

They are indeed thanks Leyla :)