Trying to figure out what to feed your kids sometimes can be a little tricky. You've exhausted all your fail proof snack ideas and need some inspiration to make snack time a bit more exciting. Well fear not! I have some lovely tasty snack ideas right here thanks to Nairn's Oatcakes.

I was lucky enough to have been sent a little pack of goodies from Nairn's Oatcakes along with a handy 'healthy eating for healthy kids' booklet to kick start my old brains cells and get the snack ideas flowing. Since I've been doing baby led weaning with Harlow this has come in quite useful as I'm always looking for something different to give her. She's an eating machine and will happily try anything however the last thing I want is for her to get bored. Her big brother, Logan, can be a bit fussier but he usually does try the odd new thing so it's worth a go. 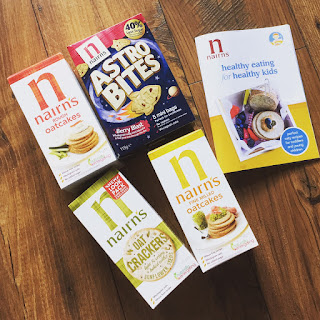 As you can see from the photo I was given a fab little selection of products which included; Nairn's Rough Oatcakes, Nairn's Oat Crackers, Nairn's Fine Milled Oatcakes and some new Nairn's Astro Bites. All of these products can be found in Asda and Sainsbury's so pretty easy to get your hands on.

First up I decided to try a sweet snack idea with Harlow to see what she would think. To be honest I'd never thought of oatcakes as being part of a sweet dish, to me they've always been savory but Harlow has a sweet tooth so I was hoping this would go down well. So I put together some Fine Milled Oatcakes with yogurt and strawberries and Harlow was delighted. The strawberries were the first to be scoffed, then the yogurt got licked before she finally decided to munch on the oatcake. She definitely gave it her best shot anyway. The recipe advises using Greek yogurt however I didn't have any at the time so just spooned on some fromage frais and we were good to go. All in all a great snack as the yogurt provides beneficial bacteria to support their digestive tract as well as protein and calcium. The strawberries provide vitamin C to keep their immune system healthy and the oatcakes will help to maintain energy levels throughout the day. 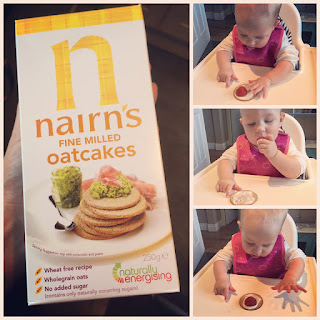 After the success of the sweet option I thought I'd go for a mix and try the kids with some cheese and grapes this time. It's an old classic but often forgotten about until I'm in a restaurant debating whether to have the sticky toffee pudding or cheese board! Any how this snack went down really well and Harlow happily scoffed hers. Again it's a great snack because it provides protein to balance blood sugar levels and of course the grapes are a great source of antioxidants including vitamin C.

There are a good few other recipes to try and in fact the most simple of all is basically dipping your oatcakes in your soup instead of bread for a change. The other half and I liked this idea so we tried it out for ourselves. It was actually pretty good and we both felt it kept us fuller for longer. It also has to be one of the quickest lunch options out there which is prefect when you're time strapped but want something healthy and nutritious. When I eventually return to work I'll be popping a packet or two of some rough oatcakes in my handbag to accompany my lunch time soup from the deli. 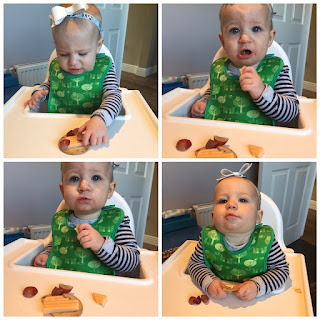 Last but not least lets not forgot the tasty Astro Bites now. I never let Harlow try them as thought she was just a bit too young at 9 months old so I've kept them aside for Logan (he's almost 6). He quite likes them and I tried some myself and thought they were super tasty. I'm sure I might have tried some previously at the Edinburgh Foodies Festival so to have some in the house was great. I think I'll be buying them for Logan's snack at school break time in future.

There are many more recipes and ideas for healthy children's snack time so please check out www.nairns-oatcakes.com for some inspiration.