Another month has passed in a blur and Harlow is now 8 months old! It frightens me to think Christmas is just around the corner and soon it'll be her 1st Birthday!! I'm trying not to think about it too much though. Since the schools have gone back Harlow and I have been on quite a few little play dates which has been lovely. It means that I don't have to stress about keeping an eye on Logan, and Harlow can get some quality time with Mummy.

Would you believe that not long after writing her 7 months update Harlow's first tooth made an appearance. It's not all the way through and a second tooth has joined it so that's her getting both front bottom teeth at the same time. For how small they are they're very sharp. Let's hope there's no biting Mummy since we're still on our breastfeeding journey. Speaking of breastfeeding, I've been invited to some lovely events recently but I'm so worried about leaving her in case she doesn't take a bottle, she's never had one. I'm honestly not sure what to do and not sure if it'll even be worth the stress. We'll see what happens in the coming weeks. 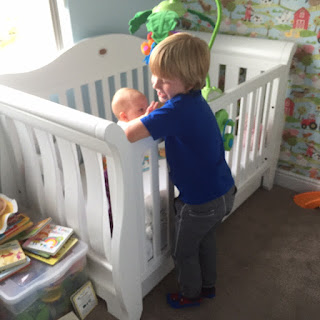 The crawling and standing has reached new levels, she's super fast on all fours and tries to reach from one piece of furniture to the next when standing but is still a little wobbly. She can stand up in her cot now which is quite cute until her big brother tries to lift her out! Cheeky monkey's the both of them. She also has a fascination for the dogs food and water bowls. Any chance she gets she'll crawl towards them at lightening speed before being lifted away.

Weaning is still going well with Harlow happy to trying anything that's put in front of her. There's some firm favourites though which include; yogurt, strawberries and spaghetti bolognese. She was weighed a few weeks ago on 26th August and came in at 16lbs 7oz, just a dainty little thing. What she lacks in weight she makes up for in height, I think she's going to be quite tall as an adult. I'm 5' 7.5" myself so it'll be interesting to see how big she grows. Clothes wise she seems to be comfortable in her 6-9 month clothes at the moment but depending on brand some are too big i.e. M&S sleepsuits, they're huge! Her 6-9 month tights are a bit too big as well but the 3-6 month seem to be perfect. I never had this problem with Logan, if anything he outgrew each stage of clothing within a couple of months and even now he's been in size 6-7 for a good few months and he's not 6 till December. 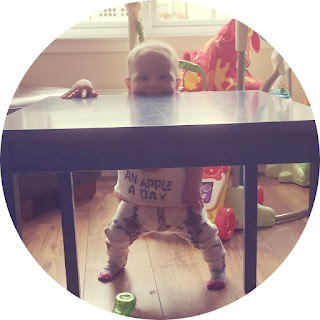 She had her first shot in a supermarket trolley a few weeks ago and loved it. I think because she's super nosy it was perfect for her to see what was going on. Normally I would leave her in her car seat and put that on top of the trolley or I would put her in the Boba Wrap but now that she's getting bigger I thought I'd try the trolley seat. Since she's still small and to keep her comfy I put one of her fluffy blankets in the trolley seat first before letting her sit in it. There were snacks on hand too for when she got fed up and it worked a treat.

Harlow still isn't a massive fan of sleeping. I'll be luckily if she manages to nap for an hour or so a day and most of this napping is done when we're in the car. If she does manage to fall asleep it's normally when breastfeeding and if I'm lucky I'll manage to get her in her cot for a quick nap but it never lasts longer than 30 minutes at most. I've managed to get her into a bedtime routine though so she knows when it's time for bed, around 7pm, however she still needs me to settle and will often wake up a few times for a snuggle and breastfeed before going back to bed and sleeping till around 10pm before another feed is due. 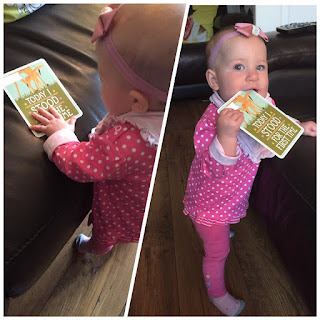 Harlow is a very happy baby and I'm lucky that she doesn't put up a fuss no matter where I take her, she just comes along for the ride and doesn't mind one little bit. Like I said she's super nosy so I think she rather enjoys it. Hopefully she'll stay like that for a bit longer but I can imagine the more mobile she becomes the more frustrated she'll be at me trying to guide her in a safe direction!

It'll be exciting to see what the next month brings and hopefully she'll grow some more hair! 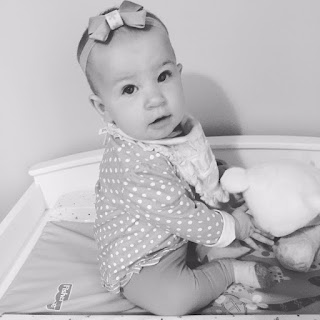