Well I can't quite believe Harlow has reached the grand old age of 7 months! Even harder to believe I've actually managed to write a blog post in time for it! I have tried with previous months but with the recent school holidays and trying to keep everyone happy and occupied, blogging has taken a bit of a back seat again. It's fine though as I did promise myself I'd blog when I wanted to and accept opportunities when I fancied, so trying my hardest to stick to that.

There's a lot happening in the life of little Harlow and because she has a big brother who needs to be kept busy, life has pretty much been full on. With the school holidays we've been here, there and everywhere, and we even managed to squeeze in a week away in the sun to Fuerteventura. Harlow really enjoyed her first trip abroad and was actually quite well behaved on the plane, there and back. She didn't even seem to mind the heat so much either whilst we were out there which was a weight off my mind. 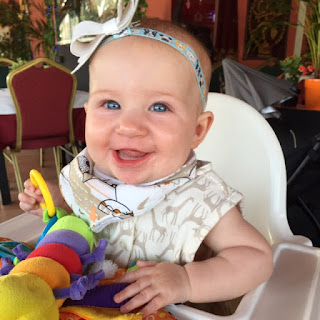 Harlow has also started weaning and I decided to go for baby led weaning this time round instead of the purees I did with Logan. I'm happy to say baby led weaning is so much easier and since Harlow is an eating machine it fits her well. She basically eats whatever we're eating and has tried and loved lots of different foods from strawberries, raspberries, garlic bread, curry, lasagne, cheesy pasta, pizza and olives to melon, rice krispies, porridge and steak! There really isn't much she can't have. Yes baby led weaning is very messy but they do get better with practice.

I'm still breastfeeding at the moment and plan to keep doing so until Harlow is at least a year old. I have to go back to work next year so we'll see what happens then. As for sleeping, well what sleep!! I think she's managed to sleep straight through from 11pm to 7am twice in her little life and that's it. She's always waking up for a midnight snack, haha. She'll go to bed around 7pm then wake up around 10pm for a little feed then again at 1.30am and then a good few times after that. I normally lose track of time as I'm so knackered. 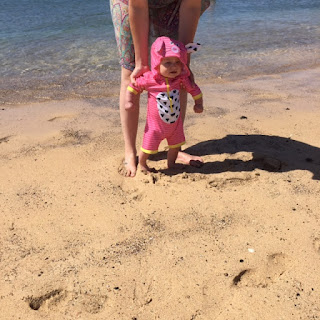 Harlow has been rocketing through her milestones recently with learning to sit up on her own, crawling around and recently grabbing onto large items and lifting herself up to stand. It's scary how fast she's learning! Her big brother was never this fast so I'm sure she'll be trying to walk in no time. It's harder for her since we have wooden floors as she tends to slip so I may need to get a rug or something so she's not sliding around as much.

Her favourite thing to do at the moment is put everything in her mouth. Be it toys, Daddy's hand or her big brother's toes (yuk!) nothing escapes her greedy little grip. Since she's a second child she's had to go everywhere and do everything so much sooner than with when Logan did anything. She's been swimming lots, went to soft play lots, had plenty of play dates with friends and even had a few trips into Edinburgh. We never seem to stop but she's very nosy so loves getting to see lots of different people and places. 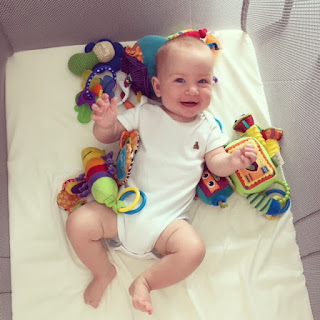 There's still no teeth yet but then Logan never got his till around 9 months old so plenty of time still. I'm not in a rush for her to get them either to be honest since we're still breastfeeding and I would hate for her to bite!

Who knows what the next few months will hold but I can't wait to find out.