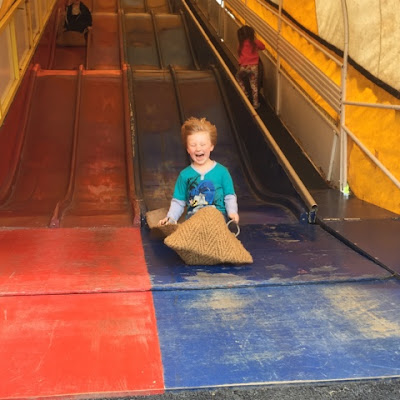 As well as receiving the lovely Dobble game to review, Logan and I were also sent the awesome Jungle Speed Safari. The game arrived in a little colourful box crammed with exciting pictures and snippets of how to play the game. Logan couldn't wait to get his hands on this and have a play so we tore it open straight away. 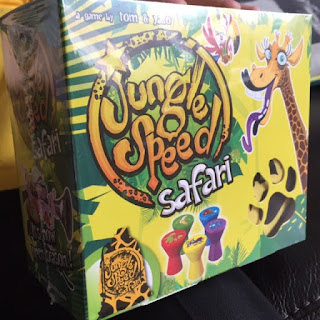 Upon opening the box we were greeted with a packet of cards, some wooden totems, a rule book and a draw string bag to keep everything. The bags actually very handy so a big well done to who ever suggested that be included with the game. So how do you play Jungle Speed Safari, well maybe the name gives it away a little. You have to be fast! Make jungle animal noises! And there's even a hunter to avoid! 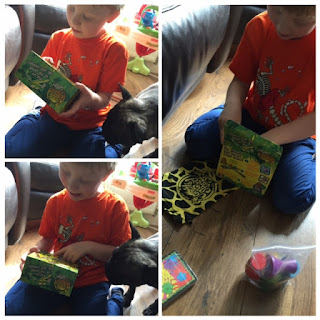 The game can be played with either 2 or up to 6 players and is recommended for 5 years +. Each game normally takes around 15 minutes which is perfect especially if you have an active child who struggles to hold their attention for long. Logan couldn't wait to have a shot of this game so we set it up after Daddy had a read of the instructions and showed us how to play. For the record I'm rubbish at reading instructions and need someone to physically show me what to do hence why Daddy is very helpful. Anyway, as you can see from the photos below if there's 2 players it's easiest to set the game up so you are sitting across from each other. You put all 5 totems in the middle and then deal out the cards face down. Once the cards are dealt that's when the fun begins.

The top card on your pile gets flipped over quickly and put in front, the first player to act on that card and do the correct task normally wins the card. There's 5 different types of cards in this game. There's a normal card with a green leaf background and there's an animal on it. This card is normal as you don't have to do anything with it, basically you can have a rest. The hungry animal cards have a blue background with an animal on them, this is when you have to hit the totem faster than your opponent depending on which animal it is. The totems have different foods on them so banana for monkey, meat for lion, leaves for giraffe etc and the fist player to hit the correct food when a hungry animal card is draw wins that card for their pile. 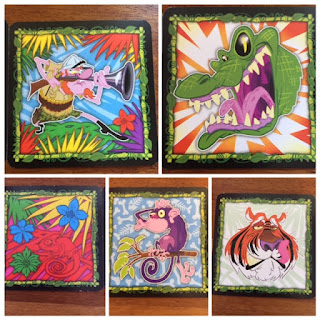 The angry animal cards have a red and sort of lightening bolt background and a very angry animal on them. The first player to imitate that animal wins the card. Then there's the chameleon cards which are colourful and you have to hit the coloured totem that is the same colour as the chameleon, but it's tricky with all the colours getting you mixed up. Lastly there's a hunter card and this is Logan's favourite. If you pull the hunter card you have to hit an opponents card pile as fast as possible to steal a card. If you cover up your own pile then you get shot in the foot and the card has to go in the middle, no one gets it. If your opponents cover their cards quicker than you can hit them then you don't get any cards. 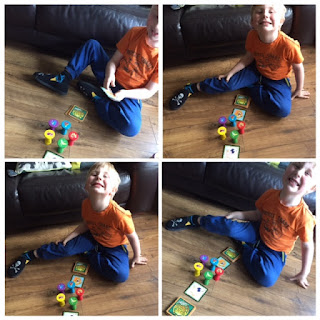 So what did Logan and I think? Well in short, it's awesome. We've played this game together so many times and if he's in a grumpy mood it always puts a smile on his face to play Jungle Speed Safari. This game really does have us laughing and giggling away, from trying to stop the hunter getting your cards to imitating angry animals. It's a recipe for family fun. As I said before the draw string bag is genius so we'll definitely be taking this game away with us on holiday, it's perfect.

You can purchase Jungle Speed Safari directly from Amazon (RRP £14.99) and it's even down to £12.49 at the moment so saving a few pennies. Or you could try your luck to win this fab game in my giveaway!!

I was sent a copy of Jungle Speed Safari in return for an honest review. All opinions are my own.

Public breastfeeding has to be one of the most daunting things for any breastfeeding mum to face never mind if this is your first baby and your first time breastfeeding. I remember breastfeeding my son in public for the first time in a little cafe full of older people and quite frankly I was terrified someone would say something. Luckily no one said anything but a few did stare which was a bit off putting, so to try and help other mums feel confident breastfeeding in public here's a few little things I've learnt along the way.

If you're a bit nervous or shy about breastfeeding in public, be sure to scope out your area to find yourself a nice quiet spot to feed your baby. If it's a cafe or restaurant try and find a table that's situated so you don't feel over exposed. I used to pick tables so that I could sit with my back to most people and feed my baby in peace. When I was really nervous I used to hunt out a local Debenhams department store and feed in their family baby changing room although I wouldn't do that now. It helped to build up my confidence gradually though.

Take a friend or family member out with you for moral support. Sometimes just having someone there to fight your corner puts you more at ease in the public domain. I know it definitely does for me especially when that person is my other half. Don't think anyone would say boo to him!

There's a few breastfeeding cover ups on the market if your baby doesn't mind having some kind of fabric over their head. Harlow doesn't seem to mind it at the moment and we use the Loveyush Nursing Scarf, which does a fab job for us when ever I need to use it. The older your baby gets the more fidgety they become and sometimes they accidentally flash you to the world so a cover up definitely comes in handy here.

Make sure where ever you are feeding, get nice and comfy first. I find that if I'm not comfy then my baby doesn't seem to be comfy either. This then sets the tone for a grumpy crying baby which then means it's harder for them to latch on without fuss as they're normally hangry (hungry/ angry) by this point.

Be sure to wear your fav comfy breastfeeding top when going out so you can easily access the feeding machines. This helps to give you a bit of confidence and you really don't want to make it difficult for yourself by wearing a fiddly top. I also find it quite good to wear a little vest top underneath your main top so that this hides your tummy and you don't feel exposed with both breast and belly out at the same time.

Keep an eye on your baby regularly to check for signs of when they're beginning to get a bit hungry. This way it gives you time to find a place to sit and get comfy before they become too grumpy to latch on and feed. I tend to feed my baby before I head out too so that they've had a top up and won't be screaming the place down as soon as I go out.

Hopefully this will help someone out there somewhere as breastfeeding in public for new mums and any breastfeeding mum can be very scary sometimes. Just remember the law is on your side as the Equality Act 2010 has made it illegal for anyone to ask a breastfeeding woman to leave a public place, such as a cafe, shop or public transport. You're doing something natural and good for your baby as well so keep going and well done. 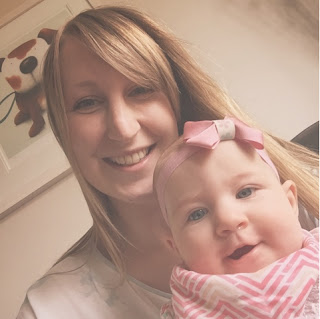 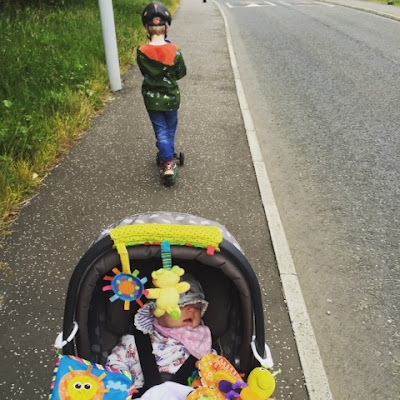 What's Wrong With a #Brelfie?

I loved breastfeeding my son and I again now love breastfeeding my daughter. It's something I was desperate to do and yes I would have been distraught if I wasn't able to do it however that doesn't mean it would have been anyone else's fault if I couldn't breastfeed. I can totally understand the heartache it would cause. I'm sure to some mother's it's like a bereavement of sorts and I really feel for mums put in this situation but know it's not your fault and your baby isn't going to be any worse off from having formula milk. Easy for me to say I suppose but heck I was fed formula and I'm doing pretty damn fine myself. I can imagine that if you were desperate to breastfeed and couldn't manage then it would be soul destroying though and for that I'm truly sorry. It's something that would really affect me.

For the mother's that bottle feed through choice and don't give a crap about other people's opinions, high five to you. I also don't give a crap when people judge and say breastfeeding is disgusting. Who the feck are those people to judge us anyway? Our babies are well fed and happy and as long as that's going on what's the issue? Let's be honest, we're not interested in how other's feed their babies anyway are we? Our babies have full tummies and are putting on weight, isn't that all that really matters? 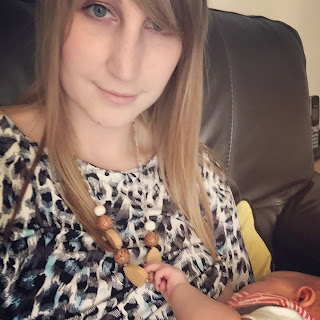 And for those people that are full of poison and like to spit on everyone's parade, and you know who you are, get a life (this is polite compared to what I really wanted to say). I'm sick of people with not a clue sticking their noses into everyone's business, if no ones getting hurt then what's the problem? You can think what you like but for goodness sake keep your comments to yourself. No one's perfect, not even you!

At the end of the day as some people would say, any publicity is good publicity so I'm glad breastfeeding is in the news again even if it's not under a perfect shining halo as it still gets people talking and discussing it. Maybe one day it'll help people to think before they speak and leave us mother's to feed our babies how we want to. Some mother's can't feed their babies at all in some countries, breast or bottle, so I find myself bloody lucky!