Telling Your Child They're Autistic

There's a question I've been asking myself for some time now. When do I tell Logan he has autism or that autism is a part of him and makes him see the world through different eyes? He's getting older and wiser these days and now that he's at school he may start to notice he's a little different compared to some of his friends. I don't want him feeling confused or overhearing the other half and I talking about his autism without him being aware of what it actually is. He must hear the word frequently and I would hate for him to think it's a negative thing in any way and as parents the other half and I do speak about it a lot and it would be nice for Logan to begin to understand what it is too.

The trouble is he's still young at 5 years old, however he's got brains and works things out and surely if he knows how babies are made then he's entitled to know how his brain works!? Thinking along those lines (and after chatting it over with the other half) I decided to buy Logan a children's story book which would explain autism on his level. He loves books and we've always found he responds well to teaching from books so I scoured Amazon, as you do, and after much searching came across a lovely simple little book which looked like it would describe autism perfectly. 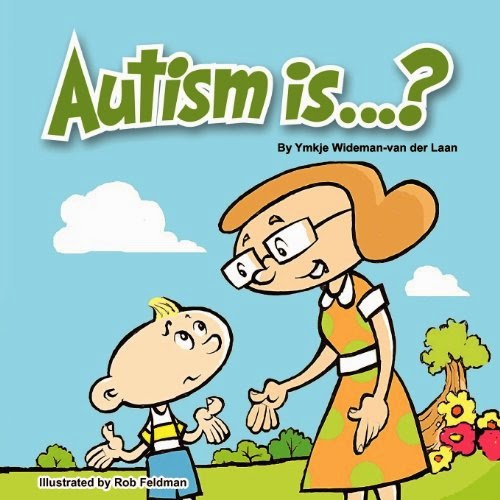 The book is called Autism Is...? by Ymkje Wideman-van der Laan. Ymkje's description of her own book is as follows: "Logan overhears his grandma tell her friend he has autism, and he asks her, ”Autism is...?” She explains it to him in this beautifully illustrated story. Autism Spectrum Disorder (ASD) is a disability that, according to new statistics released by the U.S. Centers for Disease Control and Prevention (CDC) on March 29, 2014, affects an estimated 1 out of 68 children (1 in 42 boys and 1 in 189 girls) in the US alone. It is a spectrum disorder because its impact on development can range from mild to severe. The areas of development most affected are social interaction and communication skills, difficulties with verbal and non-verbal communication, and leisure play. Someone wisely said, “If you have met one person with autism, you have met one person with autism.” The characteristics are different with each unique individual, and so are the ways to interact, teach, and care for them. You may or may not wish to explain the term autism to your child at a young age, but if you do, I hope this book can help make it easier for you, as it did for me when explaining autism to Logan. His inquisitive mind wanted to know, and once he read this story, even before it was illustrated, he was satisfied with the answer."

Reading the description of the book (as above) and seeing that it is based on a little boy (also) called Logan, who at a young age was curious as to what it was made me think this would be the perfect book for us. The fact that the author had first hand experience with an autistic child in a family setting gave me hope that this would be a lovely book so I purchased it right away and received it today (13/04/15)!

So at bed time tonight the other half settled down to read Logan the Autism Is...? story whilst I got Harlow ready for bed and gave her a feed. Afterwards the other half explained how he had Logan's undivided attention whilst reading the book and that you could see by the look on his face that his little brain was ticking away asking lots of internal questions and putting the pieces of the jigsaw together. There's a lovely activity in the book where Logan (the boy the story is based on) has drawn little bees throughout the pages of the book which you've to then find. My Logan really enjoyed this part.

I really have high hopes for this book and just from tonight's reaction I know that we're on to a winner. This will definitely be a bed time book for some weeks to come and fingers crossed it'll help the other half and I talk about autism more with Logan now that he's starting to understand what it actually is.

This is not a sponsored post although I have linked to Amazon so that you can find the Autism Is...? book easily. All opinions are my own.

0 comments on "Telling Your Child They're Autistic"