As well as reviewing the Boba Wrap for Slumber-Roo I was also sent some really cool Jellystone Designs products for Logan and Harlow to try out. Jellystone Designs create a great range of silicone jewellery for all ages from babies to adults and they come in all different shapes and sizes. The ones we were sent were the JS Junior Robot 13 Pendant for Logan and the jChews Handbag for Harlow. 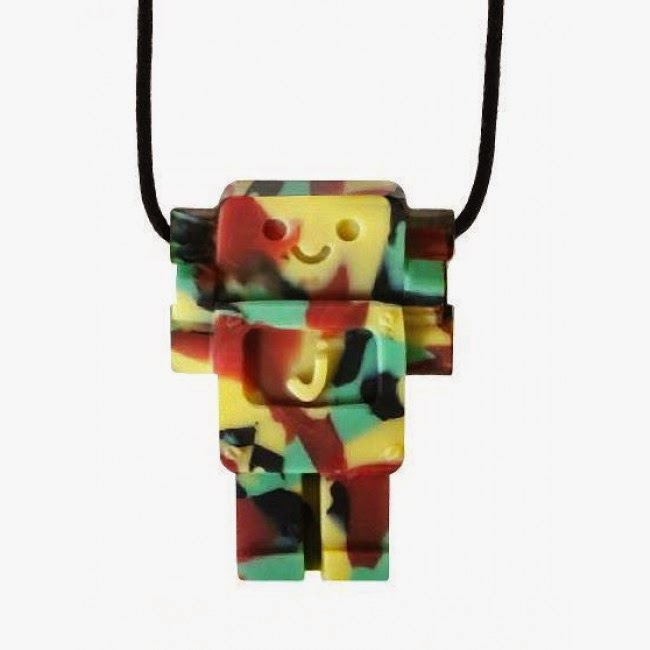 We'll start with the JS Junior Robot 13 Pendant which Logan received. It comes in 6 different colours (Blueberry, Blue Hawaiian, Grassy Green, Scarlet Red, Camo and Carrot) so plenty of choice for both boys and girls and is designed for children over 3 years of age. It's attached to a black length of rope like material which is still soft and comfortable enough to wear round your child's neck for a considerable period of time. The necklace fastens together with a practical break away clasp which is designed to separate easily when tugged, which it does by the way. The size of the pendant is: Width 3.7cm x Height 5.3cm x Depth 1.3cm, so not too big but still perfect for little hands to hold.

These pendants are waterproof, odourless and light weight as well as being BPA, Phthalates and PVC free with a fabulous soft feel and texture. If Logan isn't chewing his he's holding it in his hand because he loves the feel. With the material being soft and rubber it does tend to attract the dust and any loose dog hairs which can be a pain however it's easily cleaned with a quick dunk in some soapy water or a wet wipe. It can even be put in the dishwasher to make sure it's extra clean. RRP £12.50. 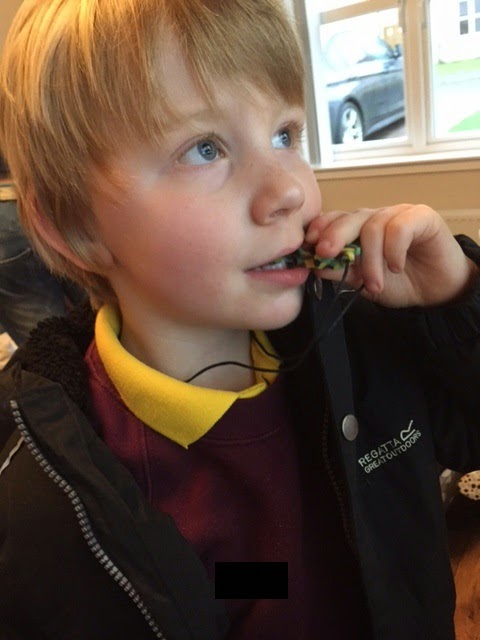 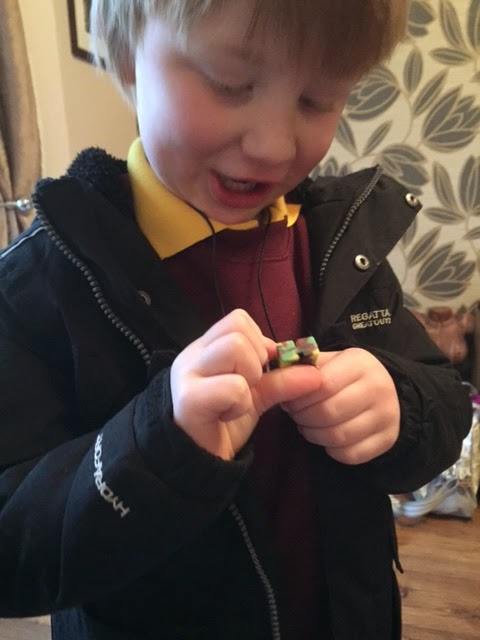 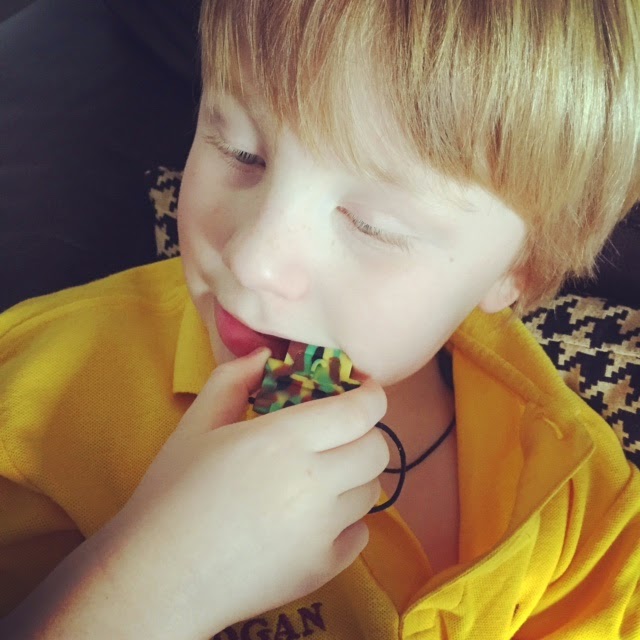 Logan absolutely loves his Robot Pendant and because he's autistic it makes a great sensory aid/ fidget toy for him especially when he's at school. The other half and I had noticed Logan had started to chew on his fingers and thumb, and even though we'd been asking him to stop he just couldn't help himself. So when I received this Jellystone Designs Robot Pendant to review it was perfect. His school were great and very accepting of him wearing it even if it was a distraction for the first couple of days. Unfortunately, as Jellystone Designs say, this Robot Pendant isn't indestructible and some how Logan managed to bite right through it's legs and pull one off! I have no idea how he managed this as I've given the robot a little chew myself just to see how strong it is and there's no way my teeth were going through. He must have been chewing on a certain part over and over again and it's finally broken. Logan's devastated it's broken and now needs to go in the bin so looks like I'll have to buy him a new one. 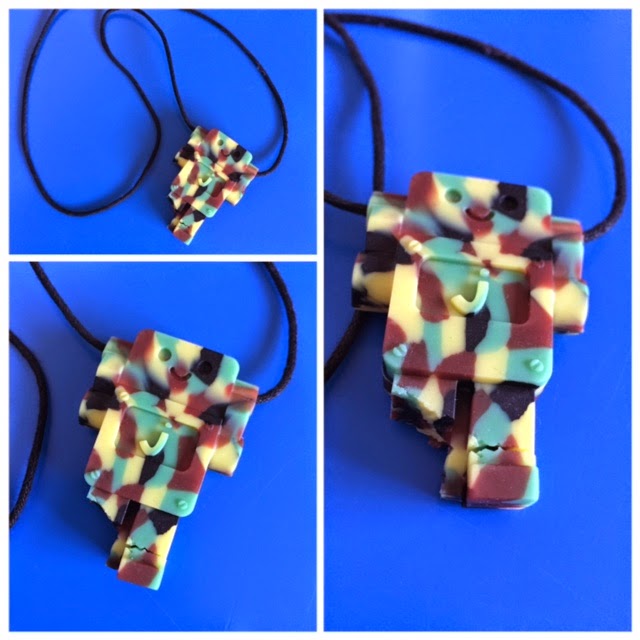 The jChews Handbag is super cool and the perfect teething accessory for all the baby girls out there. It comes in two colours; Dahlia Purple or Fandango Pink, and retails for £9.50. They're 100% BPA free and the recommended age for independent play is 4 months + or the first signs of teething. Since Harlow received hers younger than 4 months I just held it to her mouth for her to suck and chew on. She's managed to hold it a few times but she probably won't be able to properly appreciate it until she's older. She's currently 13 weeks old. The cuteness factor is well worth the purchase though.

It's the same material as the Robot Pendant so dust and hairs etc do tend to stick to it but as before it's easy to wash of with soapy water or a wet wipe. 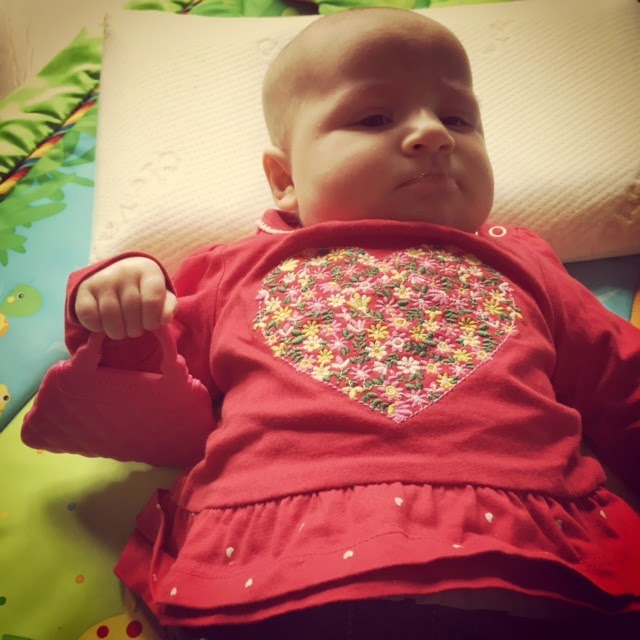 Overall these are two fantastic products which are reasonably priced for good quality teether/ sensory toys. It's just such a shame that Logan's Robot Pendant broke so quickly which reflects my rating below. Jellystone Designs do state that they aren't indestructible which is fair enough. Logan's devastated of course, so as any good parent would I'll have to buy him another and see how we get on with the new one. I've got my fingers crossed it lasts longer as it really does save him from chewing his hands etc and helps him to concentrate a bit better.

For more products and information please visit www.slumber-roo.co.uk. You can also see what they get up to on Facebook and Twitter so why not pop over and say hello!

I as provided with the Robot Pendant and jChews Handbag free of charge in order for me to conduct this review. All opinions are my own.