So c-day will finally be upon us tomorrow! Finally 40 weeks pregnant. I can't believe it's here already and have been frantically running around this week trying to get everything done and organised. Not that there's been much mind you but there's always something to be done. If it's not the huge pile of washing it'll be the house work or food shopping or school run or making sure the other half and Logan are sorted for the couple of days I'll be in hospital. I know tomorrow morning I'll be a little stressed making sure I have everything packed for the hospital but it's not miles and miles away so easy enough for the other half to grab stuff if I need it. Just need to remember and not eat anything after 10pm/ midnight and take the first of my two tablets before I go to bed!

I popped in to see the midwife on Wednesday this week to have some bloods taken pre c-section to make sure they have a couple of spare bags ready in case I need them during the surgery. Fingers crossed I don't. Everything else seemed fine though, baby's heartbeat, urine sample, measurements etc all good. I got weighed again and oh my goodness I've put on so much weight! I actually cringed when I saw the numbers settle on the scales. Oh well, I don't think we'll have another baby after this one so I've clearing enjoyed myself and pigged out till my hearts content. Let's hope this baby weighs about two stone and I can fit back into my pre pregnancy clothes straight away - haha, that'll be right then!

Tonight after dinner Logan will be heading to my mums for a sleep over and she'll drop him at school for us in the morning since we've to be in the hospital early. Fingers crossed Logan goes into school without a hitch and gets through his day ok. It's a change for him and we can never tell how each change will really effect him. That's just how it is with his autism. Sometimes he copes really well and other times it's a major meltdown. I know the right people will be there to look after him though, I'm more worried when he comes into the hospital to actually see the baby. He's not keen on hospitals and hates anyone being hurt so not sure how he'll react when he sees me in the hospital bed! The other half and I do have a present to give him from the baby though so hoping that'll distract him enough from the first initial shock.

So yeah, 40 weeks pregnant tomorrow and all going well I'm sure you'll see lots of baby spam photos all over instagram! 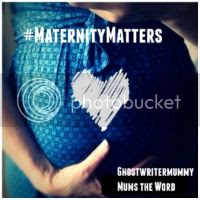 So, so exciting darling, I have an elective with my second and it was a joy. I blogged about it here if you fancy a read: http://honestmum.com/having-a-happy-c-section/. This has made me super broody! Can't wait to see baby photos! Lots of love to you and thanks for linking up x

Good luck Laura! Wishing you all the best of luck and speedy recovery following the c-section. I have followed you on instagram and I look forward to seeing the baby photos. Take care X

Yay, huge congrats, just seen your news on twitter! Thanks for linking up to #brilliantblogposts

Beautiful bump... now a beautiful baby! She is gorgeous and I hope you're both doing well! Thanks for linking up to #MaternityMatters x x x x

Congrats! I've had a look on IG and she's a beaut xx