A lot of people seem to do Christmas Eve Hampers for their kids and last year I did one for Logan too which he totally loved however I felt giving it to him on Christmas Eve was just a little bit too late as he never got the full use out of some of the items i.e. Christmas DVD. So this year I'm making a December Christmas Hamper for him instead and giving it to him on 1st December so he has plenty of time to enjoy the goodies inside and watch his DVD over and over again. For reference this is what I included in his 2013 Christmas Hamper: 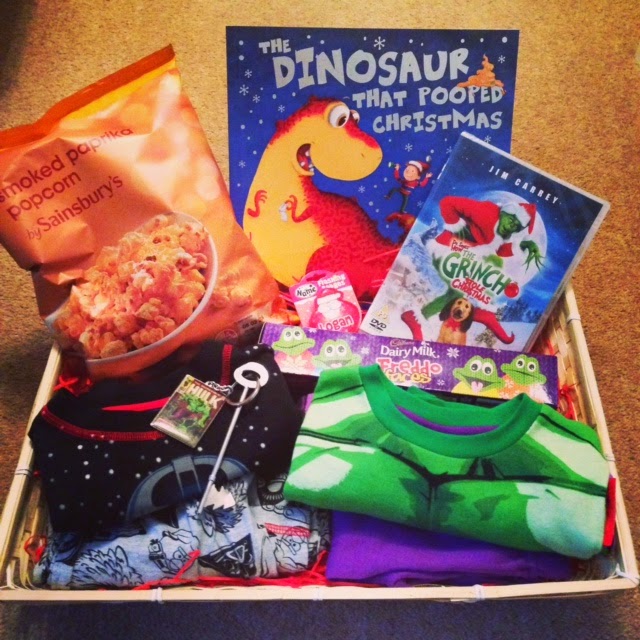 And here's what I'm planning on putting in the 2014 hamper for him:

Christmas Pyjamas
Everyone needs a new set of Christmas pyjamas, it's the law! Since my son is a mad superhero fan (only mentioned it like once to a hundred times already) I bagged some of these cool Superman pj's in the sale from John Lewis last year and just kept them aside for this year. Can't exactly remember how much I managed to get them for but think it was around half price. 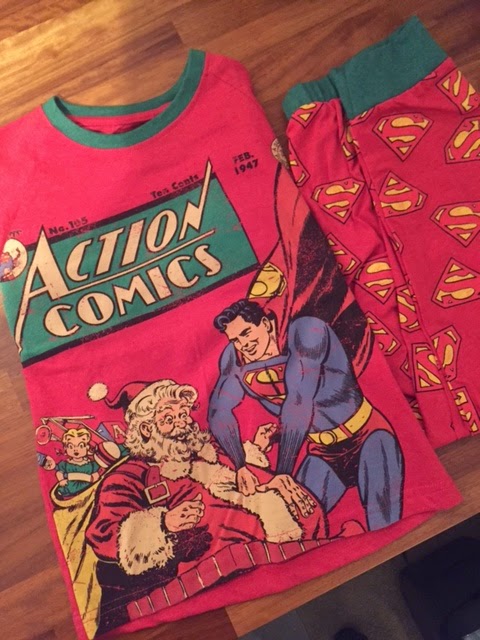 Christmas DVD - An Elf's Story: The Elf on the Shelf
Everyone's been raving about The Elf on the Shelf so I thought I'd buy this DVD for the family to watch. Fingers crossed Logan snuggles down on the sofa with us to enjoy it. Bought from Argos for £2.99 back in August. Currently £4.99 on Amazon. 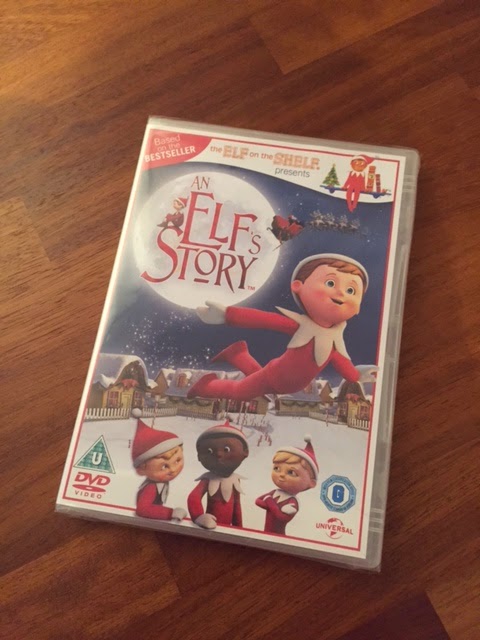 Slipper Socks
I love a pair of slipper socks myself or cosy fluffy ones you can wear round the house. My son has taken to this with glee also and loves a new pair of comfy socks. I spotted these slipper socks in the Mothercare sale £2.00 down from £7.00 and I had to have them for his hamper. 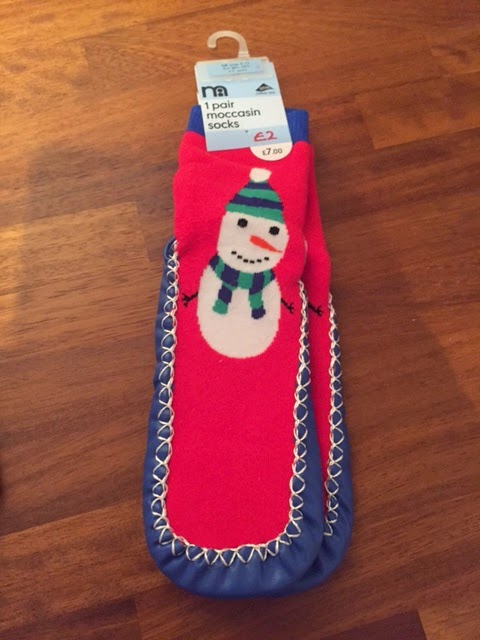 Advent Calendar
Since I'll be giving this hamper to Logan on 1st December I thought it would be a great idea to include his advent calendar in it. He's not a massive chocolate fan but is a huge fan of Lego so I purchased this when it was reduced on Amazon for £15.00 instead of £22.99. I have noticed I could have bought it in the Tesco clubcard boost though for a good price so a bit gutted about that. Oh well, can't win them all. 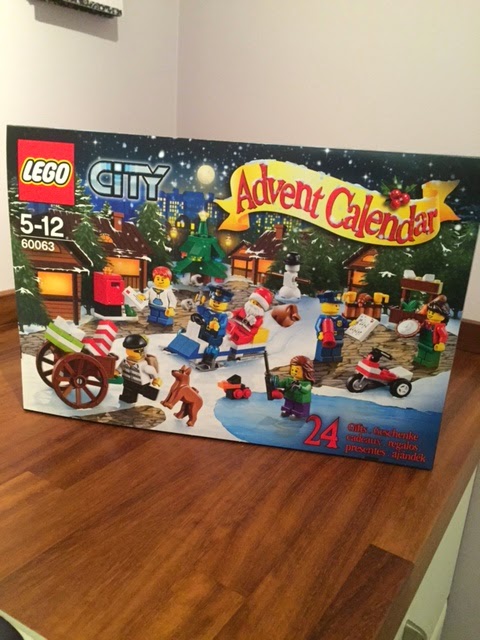 Santa's Magic Key
We don't have a chimney so of course Santa will need a magic key to get into our house and leave all the nice presents. How else would he get in!? Last year we went to a local key cutters and asked them to make us a special Santa key instead of buying some of the other ones we'd seen. Since it's such a nice little key I think we'll be using it again and popping it into the hamper this time round. 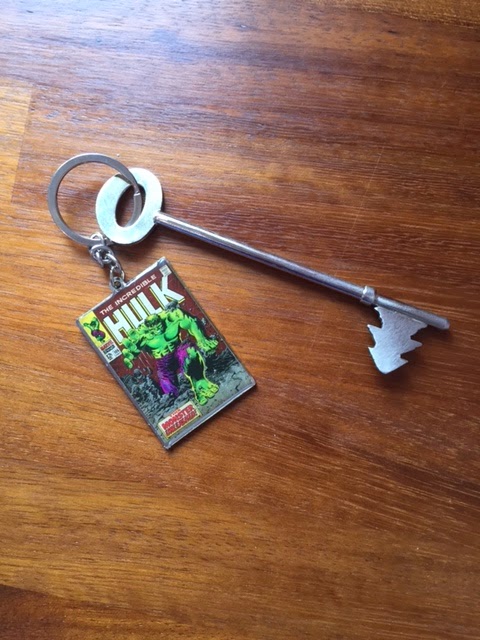 Christmas Story Book - The Snowman and the Snowdog
I was going to put in a different Christmas story this year but when I spotted this on Amazon for £5.00 I couldn't resist. It's a cute little gift set with a cuddle Snowdog toy included. The Snowmand and the Snowdog book costs over a fiver on it's own so I think this was really good value. We all enjoyed the cartoon last year so fingers crossed this is a hit. 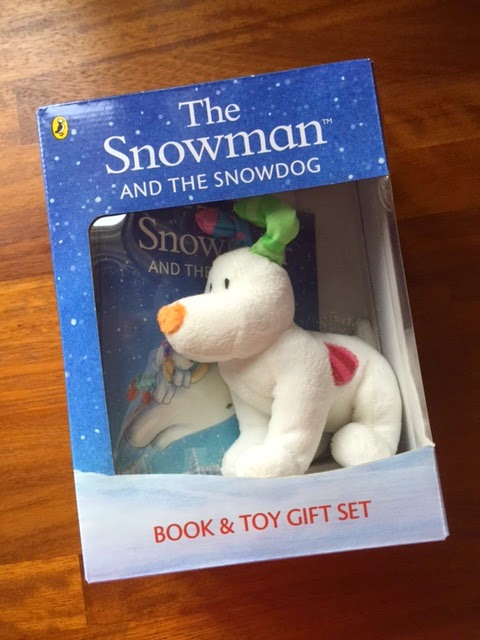 And the finished hamper - Ta Da!
As you can see there's only 6 items in this hamper however Logan will love it. It's got all the things he likes and I may even put in a packet of jelly sweeties just to keep him happy. I'd love to hear if other people are doing hampers for their little ones this Christmas and what you're putting in them?

This is not a sponsored post. I bought all of these items and all words and opinions are my own.

Thanks, fingers crossed he likes it :) x

Gorgeous gifts, love the toy Snowdog! Thanks for linking up to #brilliantblogposts

Wow that's interesting - I've never thought of doing a Christmas Eve hamper... to be honest I think it would take away some of the magic of Christmas morning for me... but love the presents. We've invited an elf to our house this year - itching to tell the little people but have to wait!