Another week and another flurry of activity. I had another midwife appointment this week to check my bloods so I should get the results soon. Fingers crossed I'm not anemic this time round. I don't feel tired apart from the expected, nothing like the last time where I could hardly keep my eyes open. Everything else was given the ok and I seem to be measuring 2 weeks ahead which probably means I'll have another big baby! Logan was just shy of 10lb but luckily I've got a c-section planned for this one *sighs with relief*.

It was all systems go with getting ready for our holiday as well. Holidays haven't gone to plan in the past so the other half and I tried to prepare as much as possible for this one to make sure everyone enjoyed themselves. Luckily for us the airport we were flying from provided a special team to help families travelling who may have special requirements, such as autism. Can I just say how great they have been and how much it helped Logan feel settled, no tantrums for us thankfully. We were fast tracked through check in and security then allowed first ish (it was very very busy) to the front of the queue for getting on the plane. It made travelling this time round a breeze compared to previous years. To keep Logan occupied on the plane I made sure to pack an array of goodies in his trunki including; stickers books, reading books, aeroplane making book, a new transformers toy, crisps and sweeties, kinder eggs with transformer toys inside, his iPad with new games and new movie etc. Anything the other half and I thought would keep him occupied and happy went in the trunki. A lot of the stuff wasn't newly bought either, it was things we already had in the house that maybe he hadn't seen in a while like his aeroplane book or cavemen sticker book. 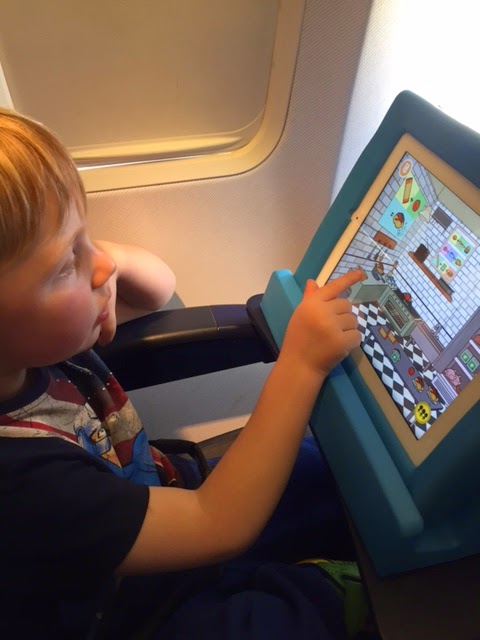 Logan's room is well under way with all the walls repainted a plain white and now we're just waiting for the superhero wallpaper to be added as a feature wall. There's so many different bright colours in the wallpaper hence why we went for white paint for the rest of the walls. I've bought a selection of new superhero bedsheets and a lego marvel superheroes light shade which I can't wait to use. Pondering curtains as well however his window is in a coombe so don't want to block out too much natural light. I'll wait and see how everything else looks first. I've also got a cool lego superman clock which Logan will be getting for his birthday so another little thing to add to his room. I'm sure there will be plenty more accessories we come across though.

I haven't bought anything else for the baby, I think I've been too busy concentrating on the holiday and Logan's bedroom so once his room's complete (hopefully by the end of next week) I can make a start on buying little bits and pieces. Nothing exciting mind you as we don't need much. Just some unisex clothes for the first few weeks.

Sounds like the airport was really helpful! We do the Trunki as well full of fun things, sticker books are ideal for keeping littlies sat down.