This week has been a non stop flurry of work, meetings for Logan and trying to get organised. I was becoming conscious that I was so busy I wasn't paying attention if the baby was moving much or not so I've made more of an effort to pay attention to movements and note them down mentally. All is good though, baby is kicking plenty and I'll continue to pay attention now. Sometimes life gets busy though and it's very easy to forget.

So yeah, busy week. The other half and I had a catch up with the Autism group we used to attend when Logan was at nursery. It was nice seeing old faces and also hearing how the other children are getting on. We also had a meeting at Logan's school to see how he's settling in so far. He seems to be enjoying himself but does struggle with conforming to the rules and structure hence why he has some extra support on hand.

Finally handed a copy of my MAT B1 Form in at work so that's all gone off to HR for processing. Feels like it's all becoming so real now, not that it didn't before obviously but things seem to be moving faster. There's already an advert went out to find mat cover for my job and I've decided how long I'll be taking for mat leave and when it'll start. I suppose I can be a bit more organised this time round due to having a planned c-section lined up.

Still trying to decide what to do for the baby nursery and looking around for people who can paint words, murals etc so will have to get that organised soon. I've managed to get a hall and entertainment booked for Logan's birthday party later in the year so that's a weight off my mind but need to organise a cool cake now and decide on game prizes, room décor, food etc. We're going for a Lego Marvel Superheroes theme which should be really fun to do. Last year we did pirates and themed everything round this which was fab - hard work though!

I'm starting to feel like my insides are being squashed now. It's not so bad when standing up but when I'm sitting at my desk at work I just feel compressed. I get out of breath a lot quicker too but my womb is already up beside my belly button so there's not much room for the lungs and diaphragm in there anymore. Think I'm going to struggle as the baby gets bigger. 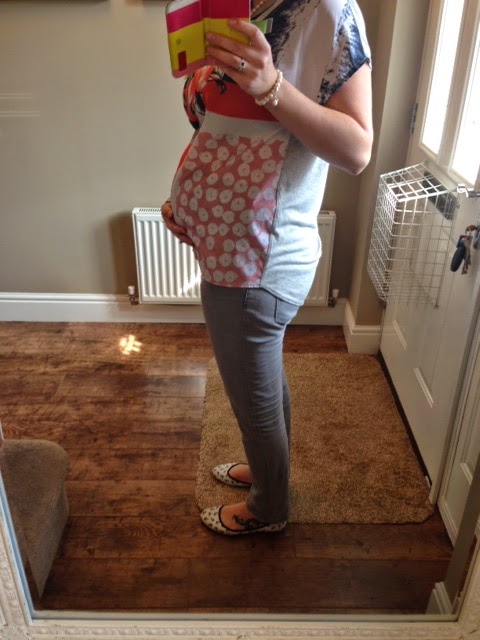 What a busy week! Hope you manage to put your feet up this weekend a bit and get some time to breathe! I don't know about you but I've found things have gone so much faster with this second pregnancy than my first - I haven't had all the time to think about being pregnant that I had last time, for starters! x

It's funny because i felt really breathless too at about 23 weeks, but it's gone now! (29 weeks). Hopefully you feel better soon :) Karen x

Oh I know that feeling of being squashed so well! Sometimes I have to just stand up and stretch out because it feels like there is just no room! Your bump is looking fab :) x x

Molly - It was manic last week and the weekend was just as busy :( Managed to chill a bit today though which is nice. Yeah things have definitely went a lot quicker this time round. Not much time to think about being pregnant when you have another child to think about.

karenanita - hmm strange how that happens, maybe it's your body adjusting to the baby growing and everything being squished?

ghostwritermummy - Totally, I feel like I have to stretch and jiggle about quite a bit to get some room back :)

You are so organised!