Starting School for the First Time - Basics for Boys

Logan will be starting school for the first time next Wednesday and to say I'm a little nervous is an understatement. He seems completely fine with the idea and he's had a good few visits so knows where he's going and what to sort of expect. I'm just worried it'll be a bit much for him and maybe too noisy or he gets frightened by the school bell. I'm sure everything will work itself out in the end and I know I'm not the only parent to worry. It's just a new chapter in his life.

Anyway, so my main point of this post was to advise on the basic things boys need for starting school. I know every school is different so here's my take on it.

Polo Shirts x6
One of the first things you'll need is polo shirts. The school that Logan is attending has a standard uniform of yellow polo shirts (thank you lord) as I'm not sure he'd survive with white. He likes to get very messy, and although he might not be as messy at school as what he does coming home from nursery I can never seem to keep whites looking white so yellow is perfect. Since you have to put your child's name on everything as well I've ordered polo shirts from a local embroidery company and asked them to put the school logo/ badge and also Logan's name on the top. It seems to be the popular thing at the moment. I've ordered 6 polo shirts as well as hoping they'll last him into next year at least and there's one for every day he's at school plus an extra just in case I can't get everything washed quick enough. I haven't bought any shirts only for the reason I worry Logan won't be able to cope with a load of buttons just yet. He can get quite frustrated. Maybe next year.

Trousers x5
I've went for some hard wearing black trousers from Debenhams, around 5 pairs as I'm sure at least one or two of these pairs will have the knee taken out of them in a few months. Fingers crossed that doesn't happen but I thought best to be prepared! I've heard that M&S, Sainsbury's and Asda are also really good and reasonable for school trousers/ uniform.

Jumpers x3
Now that the Autumn/ Winter months will be rolling in I thought it sensible to order up some jumpers in the schools maroon colouring. Same as the polo shirts I'll have the school logo and Logan's name stitched onto the front. I've went for 3 jumpers for the whole cleaning/ washing aspect as don't want to find myself short.

Socks x6 pairs
Neutral socks maybe best for school but I like to see a splash of colour now and again as well. I quite like the socks from Sainsbury's but H&M boys socks are also really nice and well priced. If you're lucky you can normally pick them up in the sale. 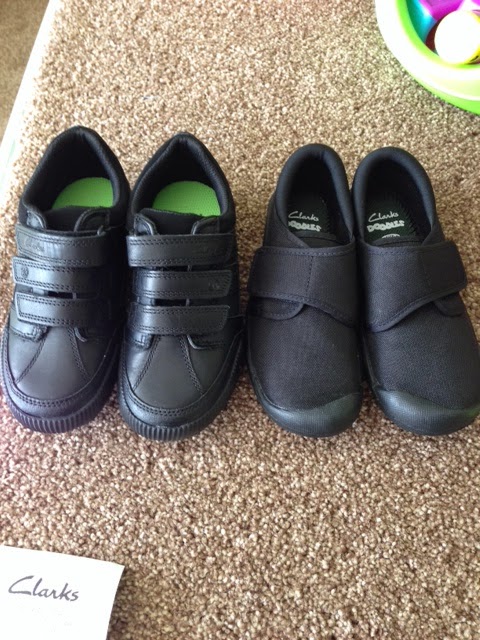 Shoes x1 pair
Taking Logan to get new shoes can always be a bit of a battle. He's got his own ideas and likes now on what he wants so plain old school shoes don't quite cut it for him. However even though getting school shoes was stressful it needed to be done and since we're used to the Clarks layout we went there. It was a busy day but eventually we found some nice shoes we all liked that were easy to put on i.e. velcro. They're lovely and smart and one pair was plenty as little feet grow quickly.

Gym Kit x3 t-shirts, x2 shorts, x1 shoes, x1 drawstring bag
For this school Logan's attending they have a dress code for gym kit. Basically white t-shirt, plain dark blue or black shorts and black non-marking gym shoes i.e. plimsolls. So I managed to find some adidas white t-shirts for £2.40 each, bought 3 as would be rude not to. Whilst Logan was getting his school shoes in Clarks we also bought a pair of their black doodle plimsoll shoes (£6.99) as these seems to be most popular. And we've noticed other kids having theirs personalised so we'll get that done as well. As for shorts I've had a nightmare of a time trying to find any and I still haven't got them. I've searched the web and H&M seem to have a good select in the right colours so I'll be nipping there at the weekend. Last but not least we're required to have a drawstring bag to put it all in for the kids to hang on their pegs. The embroidery company had ones in the school colours so just bought that and got it personalised with Logan's name. 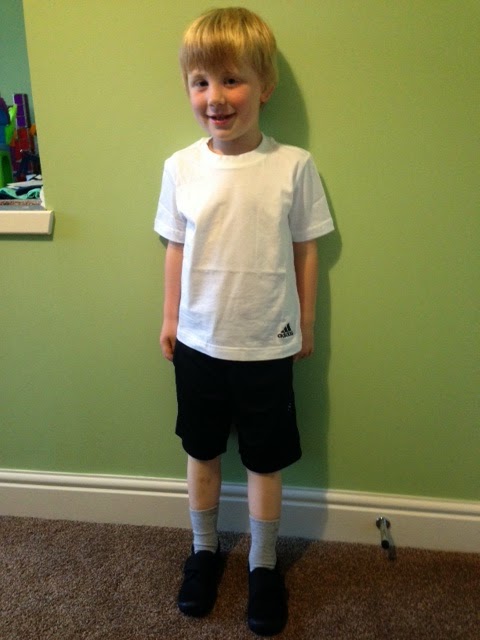 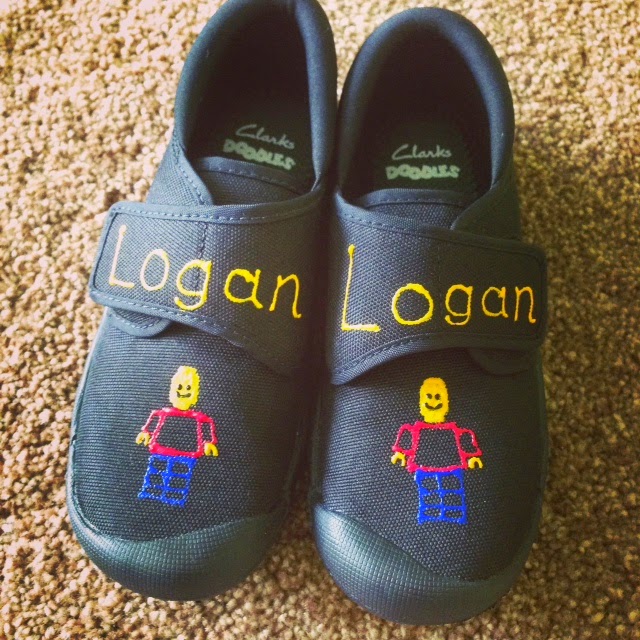 School Bag x1 & Stationery
Every child needs a school bag even if they’re little. It's like a right of passage and it doesn't have to be expensive, yet! We're all about the super hero's at the moment so purchased a Spiderman bag from Sainsbury's which was about £9.00. I then saw a cool marvel super hero bag on Amazon for £7.00 so bought it as well as it's always handy for us to take out and about and keep the school bag separate. As for stationery I kept it minimal with a marvel pencil case from Amazon and a matching stationery set from Amazon as well. It includes; 1 pen, 1 pencil, 1 ruler, 1 rubber and 1 sharpener. I'm sure if he needs anything else the school will supple or let us know.

Water Bottle x1
School nowadays seem to like the kids drinking water throughout the day to keep their little brains alter. Our school sells water bottles for around a couple of pound however Logan already has a Spiderman one which will go with his school bag so no point getting a new one. Sainsbury's have a lovely range though and are good no spills ones. Hate leaky water bottles!

Name Labels
Everything your child owns needs to be labelled in some sense as things will constantly go missing. If it’s anything like nursery I'm sure it'll happen at school too. You can either go for a laundry marker pen which can be purchased from Amazon, Mothercare etc or you can buy labels that stick on.

Coat x1
It was hard deciding on a school coat. I wanted something that was light weight, water resistant, could keep Logan warm and also had a hood. In the end I went for one of the coats that the Debenhams designers have. It was either Jasper Conran or John Rocha but the coat is lovely. Navy blue with water resistant material outside and a fleece lining plus a hood for when it's raining. It's very plain but perfect for school. 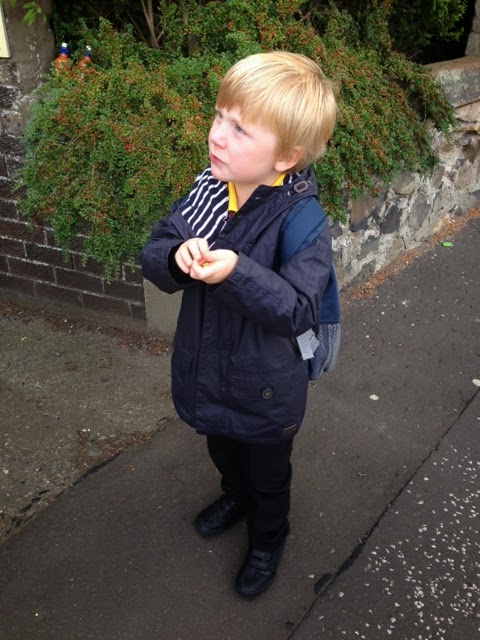 I can’t really think of any other basic items that a boy would need for starting school. If there's something I've missed out please let me know or if there's something you would include do tell. I haven't included a lunch bag and box only for the reason that some kids may have school dinners so wouldn't need it. Logan will be having school dinners so he won't need one at the moment. When he's older and takes an interest in having a packed lunch then of course I'd get him a lunch bag and box for him to use. For now we'll stick to the dinners though.