That good old touchy subject of dogs and kids eh, what am I thinking! However Logan is being a right little pest at the moment always hassling the dogs any chance he gets. I know he doesn't do it to be mean or nasty, he does it to get a reaction and by this I mean a chase from Tulli (French Bulldog) as she will chase him around the house and he will chase her. Logan is so high energy though that poor Tulli gets fed up pretty quickly and tries to hide, and Logan being how he is just doesn't get the message. Our other dog Lexie (Staffordshire Bull Terrier) is much older and wiser than Tulli pie so tries to avoid all contact with Logan when he's in a hyper mood. Good on her, I try to hide too but it doesn’t work.

The other half and I have been trying our best to stop this 'pestering the dogs' naughty behaviour that our son seems to have undertaken at the moment and I wanted to share some of things with you that have worked best so far. I'm sure we're not the only ones who's child pesters the dog/cat/hamster/lizard/giraffe whatever, you know what I mean. 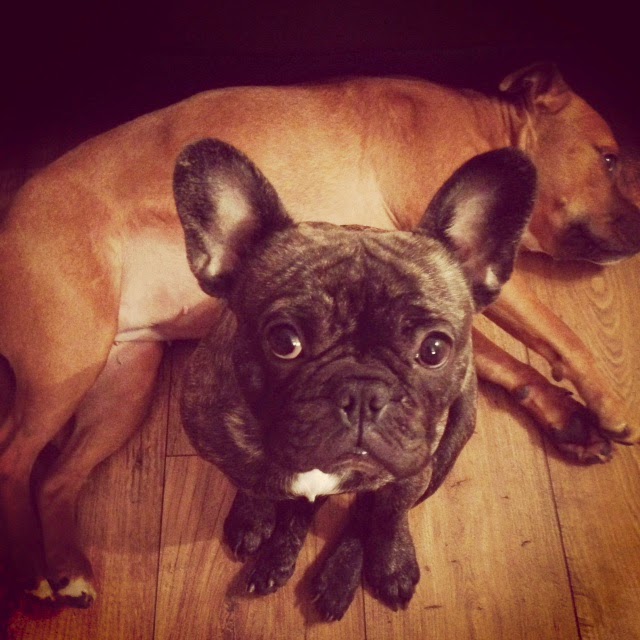 The Naughty Step
This never ever worked when Logan was younger. I think he just didn't understand the whole concept and even when explaining to him in simple language it didn't sink in. He would scream, cry, thrash around and generally be very unhappy. He wouldn't even sit on the step, instead insisting on being defiant by sitting on the floor near the step. Any how roll on a couple of years and the naughty step seems to be working. He understands that when "go and sit on the naughty step right now please" is spoken he has done something really wrong. It takes a few attempts of saying these words before he'll slump off and after a few minutes (mostly just 2 as he wouldn't sit for 4) I'll go over to him and explain what he did wrong i.e. you pulled Lexie's tail or you tried to kick Tulli and didn't stop when I asked. This general gets the message through with a lot of explaining about how he wouldn't like it if someone hit, kicked, prodded, annoyed him etc.

Distraction
OMG WOW LOOK AT THIS!!! You thought something exciting was happening there didn’t you *sneaky grin* well so does Logan when the other half and I say something similar. If we notice him acting up and pestering the dogs we generally try a distraction, sometimes it work sometimes it doesn't and that's when the naughty step comes in as a last resort. When the distraction does work though it means we can pull his attention away from the dogs and they slink off whilst we produce a game or toy from his stash that he hasn’t seen for a while to play with.


A Stern Word
Sometimes all that is required is a stern word such as "that's not very nice, please stop that" or "how would you like it if the dogs hurt you" etc. Like I've said before he has no real idea he's annoying or hurting them and when he gets very hyper he just loses all trail of rational thought. I think sometimes it has to do with his autism and tunnel vision. A few times he's even said to me "Mummy? I don't know what happen." So it seems sometimes he doesn’t even understand why he does the things he does. We'll get there though.


Showing the Proper Way to Pet the Dogs
If I'm quick enough when I recognise the pestering behaviour about to begin I can turn it around into a heavy petting session for the dogs, which they absolutely love btw, and saves any fall outs. Logan seems to really enjoy this as well especially when the dogs roll onto their backs and Logan gets to pet their tummies. It's loving seeing them like this and hopefully as Logan gets older it'll be less of the pestering and more petting.

Saying all of that it sounds like Logan can be a right terror and he's not really, the other half and I just don't think it's fair to let him pester the dogs and he should be taught some respect for them like they are taught respect for us. We're lucky in the fact that our dogs are great with Logan. Tulli will try to nibble his toes if he's annoying her but poor Lexie just doesn't rise to it at all, she'll walk behind us when Logan's becoming too annoying for her and she knows we'll make him stop the pestering. Most times if the dogs get a telling off for doing something they shouldn't Logan's the first to rush to their defence "don't shout at my doggies Mummy, they're sorry, they didn't mean it". So he does love them really, maybe he loves them a bit too much! They do say love can make you do crazy stupid things...


0 comments on "Dogs and Kids"