Review: Weetabix On The Go Biscuits

Posted by The Breastest News at Wednesday, June 19, 2013
Labels: biscuits, breakfast, fibre, in a rush, morning food, on the go, on the go biscuits, snack, weetabix

Breakfast? What's that? And I'm sure I'm not alone when I say this but 90% of the time I completely skip breakfast because… I just don't have the time! Most mums and dads these days are too busy getting the kids ready or would rather have that extra 15 minutes in bed than have breakfast in the morning. I know for a fact I'm not the only one and I also know it's not really good for you either so when Weetabix asked if I'd like to try their new on the go biscuits I couldn't refuse.

"After 80 years fuelling the nation's breakfast, Weetabix has applied their expertise and launched new Weetabix on the go - the perfect portable solution for busy mornings. The delicious baked biscuits provide all the good stuff of Weetabix fuel and are great for eating on the run, but have less fat, sat-fat, sugar and salt than the average breakfast biscuit."

Are you a skipper or an on the go eater? From the research Weetabix have done it appears 8 million brits skip breakfast every day with 6 million of us grabbing something to eat on the go! That's a massive amount and 40% say they're not even happy with their on the go choices!

Weetabix sent me two packets of their biscuits to try: Apple with a hint of cinnamon and Milk & Cereal flavour. In true testing style I took both packets to my work to taste test them with a cup of tea. I first tried the Apple with a hint of cinnamon and it was actually quite nice. I'm not a major fan of cinnamon but mixed with the apple flavouring it was lovely. The biscuit itself was quite crumbly and had the same sort of texture as a weetabix which surprised me. It did leave my mouth a little dry but with a cup of tea this wasn't an issue, if you were eating them on their own though you might struggle. The Milk & Cereal biscuit was a lot harder and more biscuit like with a crunch. The flavour definitely taste milk and cereal like which is tasty and they don't dry your mouth out as much as the Apple with a hint of cinnamon biscuits. Both very tasty biscuits in their own ways and if they don't tickle your fancy Weetabix also have Fruit & Fibre flavour available. 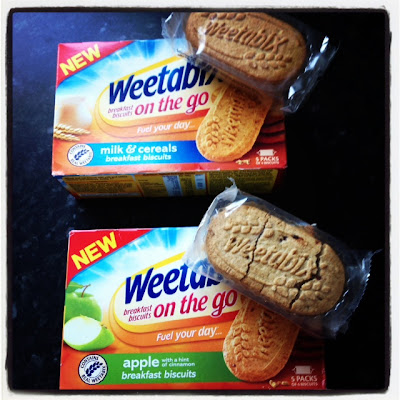 Each Weetabix on the go biscuit serving contains 4 biscuits in a handy little protective tray wrapped in plastic which helps to keep the biscuits from becoming broken. The biscuits are sold in 250g boxes containing 5 packets of 4 biscuits but if you just want to try them out and not get a whole box them the Milk & Cereal and Apple with a hint of cinnamon biscuits are also available in 50g single packs of 4 biscuits. They're available from major supermarkets and convenience stores, RRP 55p/£2.19.

I asked the other half and my son, who's 3, to try these biscuits out as everyone loves a biccie in our house, and they both really liked each flavour. If my son doesn't like something it'll be spat back at you so the fact he wolfed these biscuits down definitely counts for something. A great quick snack on the go for him when we're running late or out and about doing things with no lunch or dinner till a bit later. They're so easy to pop into my handbag or Logan's back pack and they hardly take up any space at all. I'd even pop some in the car in case we get stuck in a traffic jam or we're out longer than expected.

All in all a good biscuit and a perfect portion for breakfast. All the family liked them but I do have to say they were a little bit dry. This is easily overcome with a cup of tea or a cup of milk in Logan's case. The pricing is fair and in line with products of a similar nature, packaging looks good it's not bulky and it has a wealth of information on it for those who like the facts.

0 comments on "Review: Weetabix On The Go Biscuits"