Three well known ambassadors for WWF have come together to record special edition audiobooks for children, and grownups alike, to enjoy during this year’s Earth Hour. The exclusive audiobooks have been recorded for families to listen to during the world's biggest switch off.

As the lights go out for Earth Hour, actress Miranda Richardson, ‘Grand Designs’ TV presenter Kevin McCloud and comedian Alistair McGowan will bring to life Rudyard Kipling’s famous ‘Just So’ stories.  Eight of the classic childhood stories will be voiced, including favourites such as ‘How the Camel Got His Hump’ and ‘How the Leopard Got His Spots’.

WWF’s Earth Hour - which takes place on Saturday 23rd March 2013 this year - is a popular date in the diary for friends and families to show their support for the planet by switching off the lights for one hour.

Those taking part in this global event can gather round in candle-light to enjoy enchanting stories that have captured the imaginations of young and old for more than a century.

WWF ambassador Miranda Richardson said: "Earth Hour is a time for families to come together and show their support for the planet and it’s also a fantastic opportunity to enjoy quality family time.

“Story telling is one of the oldest forms of family entertainment and these recordings are a novel and entertaining way to spend Earth Hour together and introduce a new generation to these classic captivating tales.”

Last year’s Earth Hour was the biggest yet and saw a staggering 6,950 towns and cities in more than 152 countries take part. An estimated eight million Brits will be joining in for the world’s biggest switch-off this year.

From a single domestic light bulb to giant iconic illuminations such as Big Ben, the Taj Mahal and the Sydney Opera House, Earth Hour demonstrates a determination to help protect the planet.

Rachel Bloodworth, spokesperson for WWF said “The aim of Earth Hour is for people to show their support for our amazing planet and raise awareness of the world’s energy consumption.

“It’s a great excuse to take a step back from the hectic pace of modern life and those taking part can embrace a simpler and more rewarding way to spend time together such a good old fashion story telling session. ”

WWF ambassador Alistair McGowan said: “These captivating childhood tales conjure up all sorts of strange and wondrous animals in people’s imaginations, bringing the stories to life. But amazing creatures don’t just live in books. Our planet is home to so many incredible species and unique places - but they need protecting. WWF's Earth Hour is your chance to show you care about the state of our planet and the natural world.  Even small steps can help like keeping your energy use to a minimum throughout the year to save precious resources and stop our planet warming unnecessarily - which threatens the survival of every species on Earth, including Man. Together we can make Earth Hour into a way of life not just a gesture.”

WWF ambassador Kevin McCloud said: “Surely every parent in the land enjoys reading a great bedtime story just as much as the kids enjoy listening to it and these unique tales are such a fun way to spend Earth Hour.  So it doesn’t matter if you're five or 50, just make sure you sign up, switch off and relax with the family for one hour, to show you care about the future of our planet.”

In the week leading up to WWF’s Earth Hour: Miranda, Kevin and Alistair’s audio recordings will be available to download for people who sign up to Earth Hour from Saturday 16th March: http://earthhour.wwf.org.uk/.

However, sneak preview material will be available from Monday 4th March 2013 at: http://earthhour.wwf.org.uk/.

For more information and other ideas on how you can show your support for the planet on Saturday 23rd March please visit http://earthhour.wwf.org.uk/.

Having a family always seems to increase your household washing load. Extra clothes from the kids to your clothes some how being even dirtier thanks to the kids, it never stops! I know in my house there's always something extra to be washed from teddies, blankets and bedding to housecoats, jackets, jeans and an endless supply of socks! You can imagine my delight then when Brabantia got in touch to offer me the chance of reviewing their Drying Rack which they state is suitable for a complete family wash.

Living in Scotland the weather is always unpredictable so a good drying rack is an essential household item I think, not just for families but for couples and single people as well. It also means you can wash clothes late at night and still get them hung out and dried for the next day.

Brabantia began back in 1919 with just fifteen people and a small factory in the Dutch town of Aalst. A traditional, family owned business, run by engineers and craftsmen and right from the start, good, professional workmanship has been the driving force behind their success. Today, the skills and expertise that built the company are supplemented by specialists. Specialists in the latest materials and in computer aided design and manufacturing. Specialists who secure their position as one of Europe's leading suppliers of innovative household products. 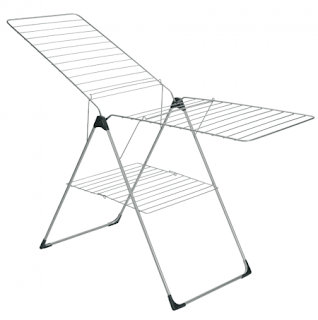 Brabantia's mission: "Everything today is increasingly 'disposable'. Buy something, it breaks. Replace it, use it, throw it away. Short lived, dispensable, consumed in an instant, quickly replaced. There's no end to the cycle of having it now and new, over and over again. We challenge this. We put all our expertise into developing solid, reliable products that are made to last. A longer life, and a continuity of use. We design products for the present, but with an eye to the future - products that will contribute to your home, and the way you live your life - for many years to come. Our ambition is simple: to develop solid household products that retain their beauty and performance for up to 20 years."
I completely applaud Barbantia's mission and totally agree with it as too many products these days are basically crap! Easily broken and disposable with no quality in mind. Fear not though, Brabantia brand themselves as the "Solid Company" and by jings they're not half wrong.

When I received the Drying Rack in the post it had minimal packaging but not a wire was out of place or a scratch in sight. It looked promising already. I quickly cut away the packaging and set it up to bask in it's full glory. This Drying Rack meant business and I honestly couldn't wait to put a load of washing on to try it out (sad but true).

The Drying Rack is a triangle shape with wings (best way I could describe it)! It's very sturdy and solid and had been made from corrosion resistant materials. The "wings" are held up by metal clips which help lock them into place and keep your washing secure for drying and if you ever have to move from one room to another. It has robust protective caps on the feet as well so there's less chance of damaging your floor when using. I'd say it's quite a big Drying Rack measuring at 104cm in height, 61.5cm wide and 5cm deep. It took up at least half of our small spare room but the good thing about this Drying Rack is the "wings" are adjustable so you can have them at all angles to squeeze into any space.

So was it any good? Well yes! It's sturdy so didn't fall over when I loaded one side of the Drying Rack to the other. Most drying racks I've used normally need some balancing act but this one stood strong and proud. It did indeed take a full load of washing so no complaints there. It's big but easy to maneuver and although it costs £63.00 it has a massive 5 year guarantee from Brabantia so you can be assured it's been built to last a while. You'll definitely get your monies worth anyway.

Overall a great piece of household equipment which is essential for any family and the great thing is you can purchase direct from Brabantia themselves. The only issue I may have is although it's easy to maneuver it can be heavy when loaded with washing so you have to be careful not to bash yourself or your walls with it.

Please visit www.brabantia.com/uk/ for more products and information. You can also see what Brabantia get up to on Facebook and Twitter. Remember to tell them The Breastest News sent you! 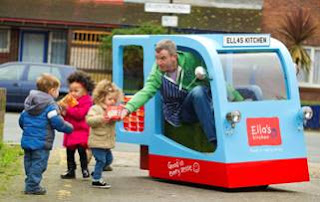 The world’s smallest milk float, standing at just 133cm tall and 88 cm wide, has been revealed today to help bring the big tastes of Ella’s Kitchen new yoghurts, fromage frais and rice pudding to tiny tots. Having taken specialists over three months to develop and construct, the mini milk float has bespoke features including a steering wheel measuring just 22.5cm and a 45cm windscreen, making it a perfectly miniaturised version of the real thing.

The world’s tiniest milk float has been created by baby and toddler food expert Ella’s Kitchen and goes on tour from today to welcome its new range of 100% organic fromage frais, yoghurts and desserts to the dairy aisle.

The battery operated tiny milk float is 60 per cent smaller than the average float and designed to be just big enough to be driven by Paul Lindley, Ella’s Dad and Founder of Ella’s Kitchen. He was spotted out and about on the streets of London, delivering yoghurts to little ones across the capital. 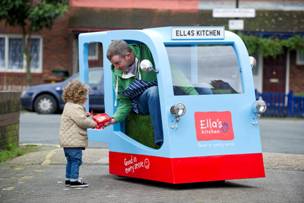 Paul Lindley comments: “We created the first - and the world’s smallest – tiny milk float, to celebrate the BIG tastes of our new dairylicious yoghurt, fromage frais and rice pudding – as you can see I can barely fit inside it! It was tricky to make the smallest milk float in the world and it was a real test for the designers, but we felt it was the best way to capture exactly how our new range is perfectly sized for little ones, but still contains big tastes for tiny taste buds with up to 20% real fruit and no added refined sugar. We’re excited about tiny tots experiencing our new range for themselves”.

Ella’s Kitchen’s new dairy range contains no added refined sugar and provides a natural source of calcium, so they are a great way to introduce dairy to tiny tots for the first time.

The new yogurts, rice puddings and fromage frais are available to purchase in the dairy aisle at Asda, Tesco, Waitrose and Ocado. Please visit www.ellaskitchen.com for more products and information.