Logan is obsessed with anything that has wheels and when he reached the age of 2 we decided it would be a good idea to purchase a little balance bike for him so that he could get outside more and learn to keep his balance and eventually progress on to a big bike when he's older. As luck would have it the lovely people from Chicco offered Logan their Red Bullet Balance Bike to test and review for them. We were thrilled to say the least.

When the bike arrived it wasn't built so my other half had to assemble it but it was so easy I think even Logan could have managed it. Instructions are provided but all the other half had to do was put the wheels, seat and handle bars on. It took all of 10 minutes at the most and the bike was ready to go. The other half did build the bike at night when Logan was in his bed as we've learnt before children don't like to be kept waiting for toys even if they only take 10 minutes. That's a life time for a little boy! 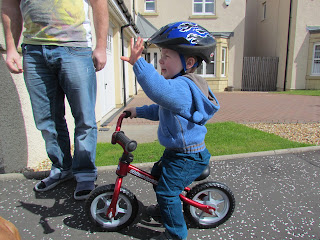 This little balance bike is a striking metallic red and looks like a mini bmx which we think is pretty cool. It has the Chicco logo at the front and 'chicco red-bullet' on either side of the frame and it looks quite good, not overly tacky like some bikes can be. The first brillaint thing the other half and I noticed about this bike is that it's so light weight. I think it weighs around 2.7kgs to be exact but that feels like nothing in your hands. Perfect for when your child gets bored and wants off the bike - I do have to say this has never really happened to us yet. Logan wants to stay on the bike, it's only when we have to go home he takes a tantrum and we have to carry him and the bike home!!

The seat is fully adjustable so can grow with your child and we found that this bike is good for taller children like Logan. He's only 2 and this bike is suggested for kids aged 3-5 years but since Logan is as tall and maybe a bit taller than some 3 year olds it's perfect for him. I've seen some balance bikes which look tiny in comparison that don't have adjustable seats which Logan wouldn't be able to use but this one from Chicco is perfect. The handle bars have nice grips on each end with little nobbly bits for extra grip too, and the wheels aren't tyres! They're made of some sort of hard foam type stuff which is actually really good as we don't have to worry about getting a puncture if Logan happens to ride over anything sharp. 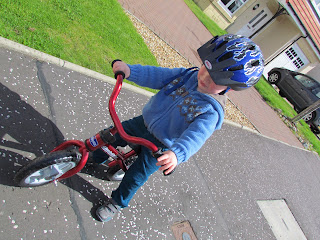 Logan has had great fun on this balance bike and can ride it quite well. He hasn't gone really fast on it yet as I think he's still a little unsure of his balance but he's definitely getting there and sure as hell doesn't want to get off anyway! When the weathers rubbish he'll ride the bike up and down our hall so it has been used quite a bit with all the rain recently.

You can purchase your child their very own Chicco Red Bullet Balance Bike from Amazon for RRP £34.99.

Overall this is a fantastic balance bike which the other half and I just can't fault. It's light weight so easy enough for us to carry and easy enough for Logan to pick up and put down on his own. The price is very reasonable and one of the cheapest compared to other bikes but that doesn't mean a lack in quality. Logan loves it and that's what counts for us, he goes back to his bike time and time again and never seems to be bored of it.

Logan is obsessed with anything that has wheels and when he reached the age of 2 we decided it would be a good idea to purchase a little balance bike for him so that he could get outside more and learn to keep his balance and eventually progress on to a big bike when he's older.