Tipped to be one of the must have toys for kids this Christmas these cool Annoying Monsters are sure to get on any adults nerves. Just what the kids want! Logan was very lucky to receive two of these noisey toys to test and review from Hawkin's Bazzar.

These very Annoying Monsters are a bit smaller than I first thought they would be but they're very soft and squishy despite having a battery pack tucked inside them and although there meant to be monsters they're still really cute. There are 4 key areas on each annoying monster identified by a swirl pattern. The first of these is on one of their eyes, if you press this the annoying monster will scream in terror, and it's a bloody loud scream let me tell you. Logan almost jumped out of his skin when he first heard it! He got over it quickly and laughed though so all good. The second key area is on the tummy, if you press this your annoying monster will fart and belch till their hearst content. We all found this really funny to listen to, even the grandparents were having a giggle. The third swirl is on one of the feet, this is where you can tickle your annoying monster and they will shake and laugh as you do so. Last but not least you can find a swirl on one of their hands. If you squeeze this hand your annoying monster will listen to you talk or sing and repeat it back to you. Logan loved this and found it quite entertaining to listen to his own ramblings. 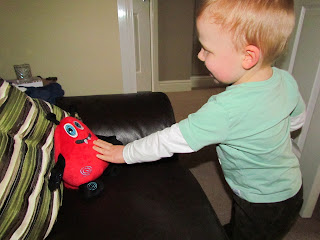 Logan liked to play with his Annoying Monsters, he found the noises they make quite funny and he loves running around with them in the livingroom whilst he watches some tv. They come with batteries but these are only for 'trying' out the toy so when we received our Annoying Monsters to review, they had already run out of batteries so luckily I had some spare to put into them. The battery compartment is easy to access with a screw driver and it's covered by a flap of the annoying monsters fur. It sticks down via 3 velcro straps which is sometimes annoying as Logan can pull this open and fiddle about with the on/off switch.

The only real issue I have with this toy is the price. It retails at £20.00 which I think is really expensive and although it's a fab toy for kids to play with I can't see them playing with it all the time. Logan does like playing with this but only for about 10 minutes at a time before he's on to the next toy, although the dog also finds it interesting so always an alternative use! 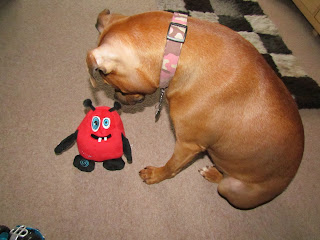 You can purchase these very annoying monsters from Hawkin's Bazaar for £20 however they are currently half price at the moment so it's the perfect time to grab a bargain for Christmas!

Overall lovely toy, well made and interesting with lots of funny noises which kids will find very amusing however not sure how much use it would actually get compared to how long Logan plays with his and the RRP is quite expensive.

Please visit www.hawkin.com for more information and products. You can also see what Hawkin's Bazaar get up to on Twitter and Facebook so why not pop over and say hello? Remember to tell them The Breastest News sent you.