Children In Need with Build-a-Bear Workshop

The lovely people from Build-a-Bear Workshop offered Logan the chance to build his very own pudsey bear which we were very excited about. Luckily our nearest store in Edinburgh does a late night on Thursday's which is very handy for mummies and daddies who work full time like me. So after work on Thursday, ahead of the Children in Need telethon on Friday 18th November, I headed into the city centre to meet my other half and Logan who were travelling in by train.
Last year Build-a-Bear sold over 11,500 pudsey and blush bears, brilliant eh! The best thing about it is that they are back instore nationwide this year for you to get your hands on. The bears cost £15 and £5 of this goes to Children in Need. You can also buy lots of little accessories for your bear including a lovely little heart which goes inside the bear as you stuff it. It costs £1 and this goes to Children in Need as well.
In 2010 Build-a-Bear donated £135,000 to Children in Need and when I asked how much the Edinburgh store had raised in the last few weeks they were proud to announce they had donated £1000 already which is fantastic. 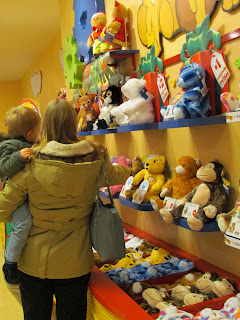 You could choose to create a pudsey or blush bear and we choose good old pudsey. Although the blush bears did look great, they have magnets in their cheeks and hands so you can put their hands up to their face as if they were blushing! Lovely idea and kids will think it's fab. I have to say the store manager was a delight to be around, she showed us step by step how to build up our bear. First we choose the skin i.e. the empty pudsey. Then we got to pick a sound for his hand so when pressed it would play your chosen tune. Logan loved to press the star wars theme tune button over and over again so we just had to get it! 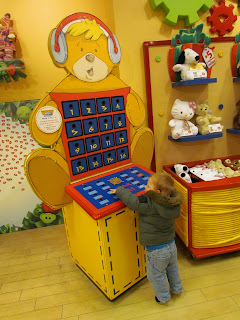 We then went over to the big bear stuffing machine to choose a heart for inside the bear and also get him stuffed. Logan picked one of the beating hearts which is really nice, when you press it you can feel your bears heart beating away inside his chest. We also got to pick some of the fabric love hearts, we each gave one a kiss, made a wish and then placed the hearts inside the bear. Logan even put his own fabric heart inside the bear, I was very proud he was listening and taking part.
The stuffing machine was a little bit loud and Logan wasn't too sure about it really and got a little frightened but he was ok in the end. He liked it how the machine kept turning the fluff around and also the flashy lights. He helped to press the pedal to stuff the bear as well which was great interaction. 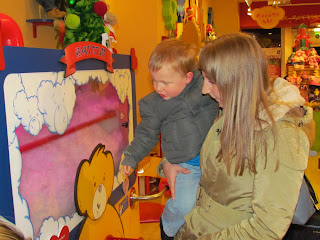 Build-a-Bear also have a little washing station where you can pretend to wash your bear and also comb his fur. We decided not to 'wash' our bear as it made a similar noise to the stuffing machine but we did brush our bear and Logan loved it. He had only learnt to brush hair just last week so got very excited when he was passed a brush.
Up next we got to choose some clothes for pudsey and boy do they have loads. We stuck to the traditional and got him some Children in Need pj's and slippers. He looks great and Logan loves him, I think the star wars theme tune has something to do with it! 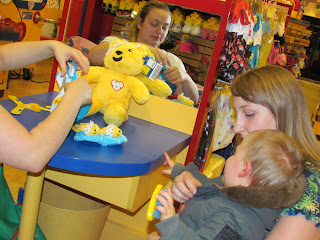 Last but not least you get to sit down and write out pudsey's birth certificate on the computer. It only takes a minute and is very simple to do.
Thanks again to Build-a-Bear for inviting us along to make out very own pudsey bear. We got the bear for free however don't worry we're going to give a nice healthy donation to Children in Need directly on Friday through their website or by telephone.

0 comments on "Children In Need with Build-a-Bear Workshop"