Wouldn't you just love for your baby to go down to bed at night without a tantrum and be soothed to sleep? Well Ewan the Dream Sheep might be your answer! He's the cutest little sheep on the block and is sure to send your bundle of joy off to the land of nod with his fluffy features and soothing sounds. The lovely people from EasiDream kindly sent us our own little Ewan for Logan and I to test and review. Here is what we thought.

First of all Ewan is very cute and I really wish he was my cuddley toy and not Logan's, he's that sweet. Logan has been sleeping through the night for some time now but after his bath he always has a slight tantrum when we put him into his grobag and get him settled into his cot for bed. We were really hoping Ewan would sort this out for us and guess what! He did, hurray! After a few nights of hooking Ewan to Logan's cot with the velcro tail and playing Logan the lovely sounds, he now watches Ewan as we put his grobag on and settles into bed. Fantastic! No more tears or tantrums, Logan will happily watch Ewan without a fuss. This has been great for the other half and I as we sometimes felt a little guilty at leaving Logan to cry even though he only had a quick cry for a few minutes we would rather he went to bed settled and not upset. So Ewan has definitely worked for us. We give him a big thumbs up and he has pride of place in Logan's cot. 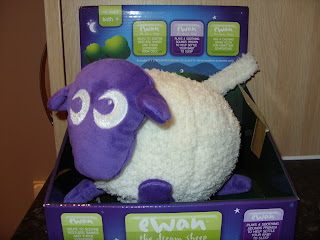 Ewan is designed to help soothe restless babies and those suffering from colic which is great. He has a calming warm glow for nighttime comforting on the front of his chest which Logan really likes to look at when going to bed at night. There are 4 soothing sounds to choose from which are proven to help settle your baby to sleep. They are; womb sounds, rain sounds, vacuum cleaner and harp music. The sounds are combined so you get 2 in one for example rain sounds with a heartbeat/ womb sounds. You can also use a 20 minute timer and volume control. You just open up Ewan's little tummy, it opens with velcro but is very well hidden so little hands don't get into it, and choose your settings. To activate the soothing sounds you press any of the buttons in his 4 legs which is handy so you don't have to find the button in the dark or blind panic.

Ewan's actual heartbeat/ womb sound combinations mimic the noise babies hear in the womb and are proven to be effective at settling and calming your baby. Combined with the comforting pink glow, Ewan helps ease the transition from womb to world. Ewan is suitable to use from birth and comes with 3 x AAA batteries (for demonstration purposes only) but the batteries are still going strong.

We also love Ewan's packaging, only 2 tiny little bits of plastic to keep him secured in his cardboard box. Very environmentally friendly. Ewan has won tons and tons of awards but this year he won Gift of the Year 2011 which is an amazing achievement. You can purchase Ewan for £29.99 from places such as John Lewis, Tesco, Boots, Mothercare, Amazon, JoJo Maman Bebe, Kiddicare and also EasiDream's only shop.

The creator of Ewan lets us know the research behind him: "We went to great lengths to make sure that we used the best possible sounds in our dream sheep to accompany the movement in the soothing system. With the help of the UoB’s foetal monitoring equipment, the actual womb sounds and heartbeat of a pregnant mum were recorded by the team. These sounds were then combined with household, musical and natural sounds at low bass frequencies of 125hz to produce ‘pink noise.’ This is the type of noise that babies predominantly hear when in the womb, which is why it is so effective. Again, parents were asked to trial a selection of sounds at home to find out which ones worked best with their baby and from these results, the top 4 most popular sounds were selected to be used in our dream sheep, ewan.

The final ingredient to the mix was the soothing pink glow that is emitted from ewan™ the dream sheep... research has shown that babies are comforted by certain aspects of the womb, so a pink ambient glow was the natural choice for our dream sheep’s tummy.

Feedback from parents has shown that ewan™ the dream sheep is loved by newborns through to toddlers and beyond… so there really is a place for ewan in every household!".

Overal Ewan has definitely been our Dream Sheep and helped Logan settle brilliantly at bed times. We could not have asked for better. Ewan is a little pricey but worth every penny in my opinion. He has managed to survive Logan pulling, tugging and throwing him around as well so a massive thumbs up as Logan AKA The Destroyer has a habit of breaking things!

Please visit www.easidream.co.uk for more information and you can also follow EasiDream on twitter and see what Ewan gets up to. Remember to tell them The Breastest News sent you!