The lovely Lotus Tissues and Olbas Oil people have teamed up together to create the new Lotus Olbas Tissues and have asked if I would like to review them. I ofcourse said yes as this is an ingenious idea!

I was sent a nice family sized box of tissues so there was plenty to go round for everyone. The first thing that strikes you is the familiar olbas oil smell. This smell often reminds me of my gran, she was a massive fan of olbas oil and kept a tissue with a dab of it close by just incase. 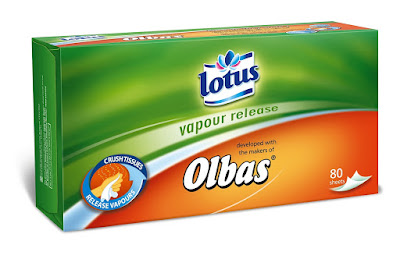 The tissues are nice and soft as I expected from Lotus and the Olbas Oil  isn't too strong that it'll take the hairs from your nostrils. To release the olbas vapours correctly you have to crush the tissue so that you can breathe in the oil before and after blowing your nose. It's very good and always helps clear my nose which I think is really handy and saves you buying two different products as you have them combined into one, money saving bonus.

The only problem I do have with these tissues is that the olbas oil sticks to your fingers after you have used them so make sure and wash your hands before touching your eyes or your baby as these tissues are not suitable for children under 6 years old. Also touching on the eye subject, if you're a bit weepy like me when you watch some TV programmes then you can't use these tissues to wipe your eyes so don't forget that when you buy them.

These tissues also come in handy pocket sized packs so you can take them with you in your handbag to carry at all times. You just never know when the next flu or cold with strike you! And being in the UK that could be every other week!!

These tissues can be found in Boots and most major supermarkets and retail for around £2.29.

Overall these are a great invention and the price isn't too bad but it puts me off that you can't wipe your eyes with them and the olbas oil sticks to your fingers.