Logan and I were lucky enough to be asked to review the Build-A-Bear Workshop, so today we went into our nearest store which was in Edinburgh on Princess Street. The weather was horrid and it even snowed so when we arrived we were glad to receive a warm welcome and see smiling faces. Logan was a bit grumpy today as well, he's teething and it's hurting him a lot so he was a bit of a handful at Build-A-Bear but we made it through to the end with a gorgeous bear to keep him company in his cot at night. He's a lucky boy but he doesn't even know it!
Arriving at the store we were greeted by friendly staff who were bursting with a wealth of knowledge and raring to show us around. The store itself is lovely, very well laid out so that you start by choosing your bear and work your way round having him stuffed and choosing his clothes, until his birth certificate is ready to be drawn up and you're on your way home with your new friend. A very fun and organised experience for your child. I would recommend this experience for older children of say maybe 2-3 years and upwards, Logan is 14 months old just now and I think he was a little bit young for the whole experience as he didn't understand what was really going on.
Anyway, the lovely Anne introduced herself and showed us their selection of bears and told us about each of them and some of their features. That helped a lot as there was such a choice we didn't know where to start. The bear we liked the most was the one who was asthma friendly and whose eyes were sewn on instead of buttons, as Logan likes to chew on things and we didn't want him choking on the eyes if he happened to get them off. Anne told us this bear was perfect for newborns as well as older children and I completely agree and as stated above, he's very soft, asthma friendly and has sewn on eyes, what more could you wish for! There are other animals who are asthma friendly too so you don't have to stick to the bears.

Logan was then asked to choose a sound for his bear, they had everything from the star wars theme to dogs barking and little boys speaking. You can even record your own voice!! How cool is that! We chose the giggling sound as Logan found this amusing so Anne put the little button in the bears hand so it was easy for us to find and Logan could easily press it when he wanted to. 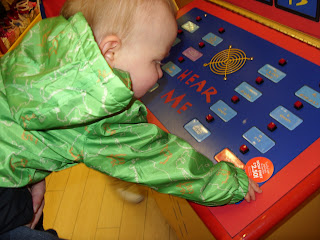 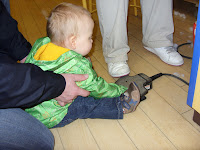 Anne then took us over to the stuffing machine were they stuff your bear and make him come alive! Logan helped to do this by pushing on the foot pedal that operates the machine. After the bear had been stuffed and we were asked if we were happy with how much stuffing was in the bear, Logan was asked to pick the bears heart (which is a little red fabric heart) give it a kiss and make a wish and put it inside the bear so he comes alive. I thought this was very cute and a really nice thing to do and something I could see children loving as they'll have made their own little wish which is inside the bear and only they know what the wish is. Very sweet. 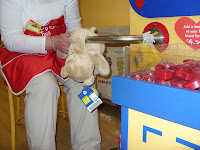 After this we got to chose the bears clothes, as Logan was too young to decide we asked if the bear could be dressed in something that Logan would wear. This wasn't a problem as they have everything you could ever imagine at Build-A-Bear. They have doctors outfits, footballers outfits, dresses, swimwear, pajamas, special costumes etc and all the shoes you could ever dream of. Logan's bear has a pair of sketcher trainers! How many bears do you know who have sketchers? 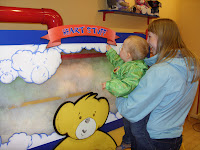 Next on the list was to write up the bears birth certificate, I had no idea that they would give your new friend a birth certificate so was very exciting and a nice surprise. You get to make this up yourself on Build-A-Bears special computers. We called Logan's bear Zander, a little bit different but realistic at the same time. The birth certificate was printed off and makes a great little addition to go with your bear. It tells you the bears date of birth, name, how much he weighs, his height, fur colour, eye colour and who he belongs to. Also at the bottom of the birth certificate it gives you an ID number and key code so that if your child is old enough they can join the buildabearville.com and play online for free.
Now you're bear is complete and he's ready to go home with you. He gets his own little house to travel in until he gets home to your house. Another nice little extra that makes it all the more special. 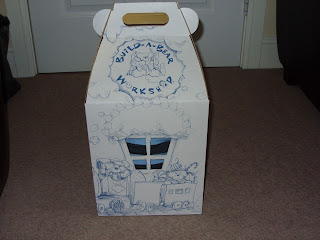 Another brilliant service which Build-A-Bear provide is that each bear/ animal comes with a unique barcode which is placed inside the bear once it has been stuffed and when you fill in your details for the birth certificate it stores them (and is not used in any other way other than stored on their system) so that if your child loses their bear and someone hands it in to one of the Build-A-Bear stores they'll be able to open up the bear and reunite it with it's owner. Genius!
Also children who love Build-A-Bear can have their own Birthday Party in store. There has to be a minimum of 6 children attending and you get a party leader to keep your guests entertained, you will have less hassle and mess as the party is not in your own home (brilliant) and there is a wide variety of animals to choose from so everyone will be kept happy. The guest of honor gets a free gift and a photo to remember their special day by. And with over 50 stores up and down the UK you can't go wrong. 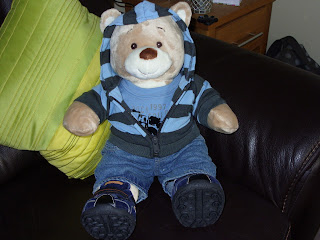 So, I here you ask, what about the costs? Well bears start from £9.00 and everything after that is priced individually so you can have as much or as little as you want and you will always be able to add up how much it will cost as you go incase you are on a budget so you won't over spend.
Overall I feel the Build-A-Bear experience far out ways the price and is worth every single penny spent. The bears/ animals are all of excellent quality, so are the clothes and accessories to go with them. And at the end of the day no two bears/ animals are ever going to be the same so you go away with a unique toy for your child or an excellent gift which the recipient is sure to love. Logan was a bit grumpy so didn't appreciate the experience as much as I did so children between 2-3 years are a good place to start, I think they would understand the process and appreciate it a lot more.
And I'd like to say a big thank you to Anne, who was very professional and enthusiastic. Even though Logan was a grumpy little man, Anne made the experience enjoyable and carried on regardless of Logan's tantrums. A true professional and staff that Build-A-Bear should be proud of.
Logan's rating - 6/10
Mummies rating - 9/10
Please visit the Build-A-Bear site to see all the things that they offer, they have such a great selection I just couldn't do it all justice in one review: www.buildabear.co.uk